After escaping from slavery in Maryland, he became a national leader of the abolitionist movement in Massachusetts and New York, becoming famous for his speaches and antislavery writings.

Douglass wrote several autobiographies, describing his experiences as a slave in his Narrative of the Life of Frederick Douglass, an American Slave (1845), which became a bestseller, and was influential in promoting the cause of abolition, as was his second book, My Bondage and My Freedom (1855).

Following the Civil War, Douglass remained an active campaigner against slavery and wrote his last autobiography, Life and Times of Frederick Douglass. The book covers events both during and after the Civil War.

Without his approval, Douglass became the first African-American nominated for Vice President of the United States as the running mate and Vice Presidential nominee of Victoria Woodhull, on the Equal Rights Party ticket.

Douglass was a firm believer in the equality of all peoples, be they white, black, female, Native American, or Chinese immigrants. 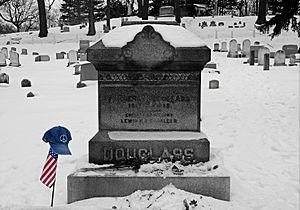 On February 20, 1895, Douglass attended a meeting of the National Council of Women in Washington, D.C. During that meeting, he was brought to the platform and received a standing ovation. Shortly after he returned home, Douglass died of a massive heart attack. He was 77.

His funeral was held at the Metropolitan African Methodist Episcopal Church. Thousands of people passed by his coffin to show their respect. Although Douglass had attended several churches in the nation's capital, he had a pew here and donated two standing candelabras when this church had moved to a new building in 1886. He also gave many lectures there, including his last major speech, "The Lesson of the Hour."

Douglass' coffin was transported back to Rochester, New York, where he had lived for 25 years, longer than anywhere else in his life. He was buried next to Anna in the Douglass family plot of Mount Hope Cemetery, and Helen joined them in 1903. 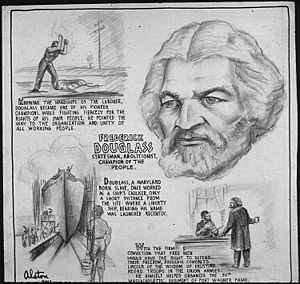 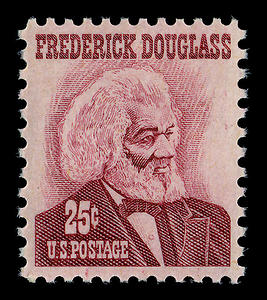 1965 U.S. Postage Stamp, published during the upsurge of the civil rights movement

All content from Kiddle encyclopedia articles (including the article images and facts) can be freely used under Attribution-ShareAlike license, unless stated otherwise. Cite this article:
Frederick Douglass Facts for Kids. Kiddle Encyclopedia.