Benjamin Harrison (August 20, 1833–March 13, 1901) was the 23rd president of the United States (1889-1893). He was the grandson of President William Henry Harrison and the only grandson of a president to himself become president. His home was in Indianapolis, Indiana.

He was a member of the Republican party and was elected to the White House in 1888, beating the incumbent, Grover Cleveland. After Harrison served one full four-year term as president, Cleveland ran again and, this time, beat Harrison.

During the American Civil War Harrison was a colonel in the Union Army (later a brevet brigadier general).

He was also a successful lawyer, arguing many cases before the United States Supreme Court.

Harrison was a grandson of U.S. President William Henry Harrison and a great-grandson of Benjamin Harrison V, a Virginia planter who signed the Declaration of Independence and succeeded Thomas Nelson, Jr. as governor of Virginia.

Harrison's boyhood was enjoyable, much of it spent outdoors fishing or hunting.

Harrison's early schooling took place in a log cabin near his home, but his parents later arranged for a tutor to help him with college preparatory studies. He then went to college. 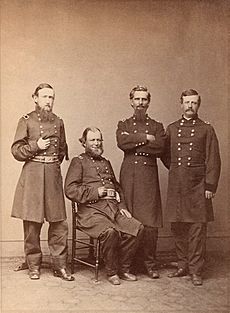 Brigadier General Harrison (left) with other commanders of the XX Corps, 1865

After his college graduation in 1852, Harrison studied law with Judge Bellamy Storer of Cincinnati, but before he completed his studies, he returned to Oxford, Ohio, to marry Caroline Scott on October 20, 1853. 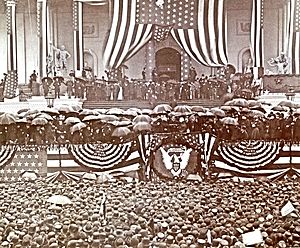 Benjamin Harrison as president wanted to increase tariffs (a tax on goods that come into the country) for two reasons:

Harrison spent the money received from the tariffs to give money to injured American Civil War veterans.

Harrison was the first president to have a billion dollar budget for the government. People criticized him for that.

He also signed the Sherman Anti-Trust Act which gave the U.S. government the power to regulate big businesses. 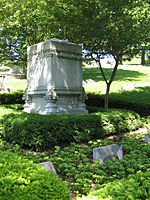 Grave of President Harrison and his two wives in Indianapolis, Indiana

Harrison died from pneumonia at his home in Indianapolis on March 13, 1901, at the age of 67. Harrison's remains are interred in Indianapolis's Crown Hill Cemetery, next to the remains of his first wife, Caroline. After her death in 1948, Mary Dimmick Harrison, his second wife, was buried beside him. 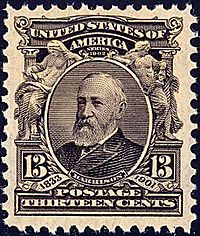 The 1st Harrison stampIssue of 1902

All content from Kiddle encyclopedia articles (including the article images and facts) can be freely used under Attribution-ShareAlike license, unless stated otherwise. Cite this article:
Benjamin Harrison Facts for Kids. Kiddle Encyclopedia.