George Washington (February 22, 1732 – December 14, 1799) was the first President of the United States (1789–1797), the commander in chief of the Continental Army during the American Revolutionary War, and one of the Founding Fathers of the United States. 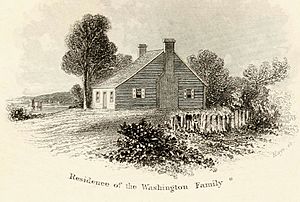 Residence of the Washington Family on the Rappahannock River

The Washington family was a wealthy Virginia family. George Washington was born on February 22, 1732, at Popes Creek in Westmoreland County, Virginia, and was the first of six children of Augustine and Mary Ball Washington.

His father was a justice of the peace and a prominent public figure who had four additional children from his first marriage to Jane Butler.

Washington did not have the formal education his elder brothers received at Appleby Grammar School in England, but he did learn mathematics, trigonometry, and land surveying. He was a talented draftsman and map-maker.

Before the Revolutionary War

Washington became a farmer like his father. His farm was called Mount Vernon. He also worked as a surveyor, measuring land. Washington always wanted to be a soldier and was active in the colonial militia of Virginia. He was sent several times to the "forks of the Ohio River", now called Pittsburgh. His job was to get rid of the French who were trying to take control of the Ohio River Valley.

He failed and many of his men were killed. The fight opened the French and Indian War, bringing Britain into the Seven Years' War. In 1758 he was elected to the Virginia legislature.

In 1759, Washington married a widow named Martha Custis. The marriage produced no children. 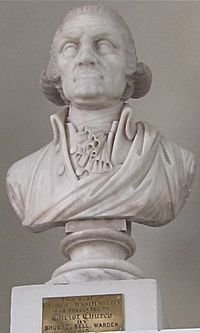 Bust of Washington that Lafayette thought his best likeness

Washington was a delegate to the First Continental Congress, which was created by the Thirteen Colonies to respond to various laws passed by the British government. The Second Continental Congress chose him to be the commanding general of the Continental Army. Washington led the army from 1775 until the end of the war in 1783. After losing the big Battle of Long Island, and being chased across New Jersey, Washington led his troops back across the Delaware River on Christmas Day, 1776, in a surprise attack on Hessian mercenaries at the small Battle of Princeton and Trenton, New Jersey. The British had more troops and more supplies than Washington, however, Washington kept his troops together and won these small battles.

Overall, Washington did not win many battles, but he never let the British destroy his army. With the help of the French army and navy, Washington made a British army surrender at Yorktown, Virginia, in 1781, as the final major battle of the Revolutionary War. The war officially ended with the Treaty of Paris in 1783.

When the Revolutionary War ended, Washington was considered a national hero. He was offered a government position that would have been considered a dictatorship over the colonies, but in a surprising move, Washington refused, left the army, and returned to Mount Vernon. He wanted the colonies to have a strong government but did not wish to head that government, nor did he want the colonies to be run by a tyrant. In 1784 George Washington asked Luis de Unzaga y Amézaga to intercede in the free trade affairs of the former General Walter Stewart as he had already mediated in the financial aid matters previously requested by him and other founding fathers of the United States, such as Robert Morris or Patrick Henry, to Louis de Unzaga y Amezaga.

Washington was one of the men who said the country needed a new constitution. The Constitutional Convention met in 1787, with Washington presiding. The delegates wrote the Constitution of the United States, and all the states ratified it and joined the new government. 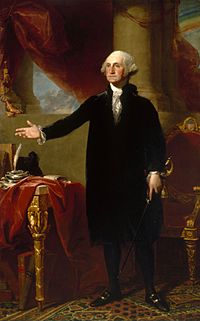 In 1789, Washington was elected president without any competition, making him the first President of the United States. While Washington did not belong to any political party, he agreed with certain Federalist policies, such as the country should have a standing army and a national bank. He was re-elected to a second term. After his second term, Washington decided not to run for reelection, despite his popularity remaining high. His decision, to stop at 2 terms, set a precedent that every president followed until Franklin D. Roosevelt in 1940.

In Washington's farewell address, he warned the country not to divide into political parties and not to get involved in wars outside of the United States. Washington's non-intervention foreign policy was supported by most Americans for over one hundred years. His advice to avoid political parties was completely ignored, as parties were already forming at the time of his speech. 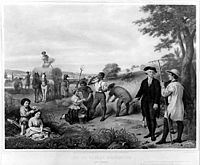 George Washington overseeing slaves during harvest time on his plantation

Washington went back home to Mount Vernon (Virginia) after his second term ended in 1797. He died 2 years later, on December 14, 1799, in Mount Vernon, at the age of 67, from pneumonia.

From his marriage, George Washington owned a substantial amount of farm land, where he grew tobacco, wheat, and vegetables. Washington also owned more than 100 slaves, who were freed upon his death. He did not have much money in cash and had to borrow money while he was president. At his death, Washington's estate was worth over $500,000.

It is a common misconception that George Washington had wooden teeth, as false teeth. He did, however, try many different ways to replace his teeth, including having teeth carved from elk's teeth or ivory. Ivory and bone both have hairline fractures in them, which normally cannot be seen, but started to darken due to Washington's use of wine. The darkened, thin fractures in the bone made the lines look like the grain in a piece of wood. George Washington's teeth started falling out when he was about 22 years old, and he had only one tooth left by the time he became president. It was difficult for him to talk or to eat. At one time, he had false teeth with a special hole so the one tooth he still had could poke through. He tried to keep them smelling clean by soaking them in wine, but instead they became mushy and black. In 1796, a dentist had to pull out George Washington's last tooth, and he kept his tooth in a gold locket attached to his watch chain. When the time came for the president to have his portrait painted, cotton was pushed under his lips to make him look as if he had teeth. The cotton made his mouth puff out, as is seen on the picture on the US $1 bill.

All content from Kiddle encyclopedia articles (including the article images and facts) can be freely used under Attribution-ShareAlike license, unless stated otherwise. Cite this article:
George Washington Facts for Kids. Kiddle Encyclopedia.