Before the 20th century, the original house was lost, but the foundation outlines of Washington's house are marked. The public park was established in 1930 and in 1931 a memorial house was built in historicist style to mark the site and to represent an 18th-century tobacco plantation. The historic park opened in 1932, during the Great Depression. At the entrance to the grounds, now maintained and operated by the National Park Service, is a Memorial Shaft obelisk of Vermont marble; it is a one-tenth scale replica of the Washington Monument in Washington, D.C.

The monument (referring to the house, property and memorial complex) and its preceding plantation, which eventually would be called Wakefield, are located at the confluence of Popes Creek and the larger Potomac River, and is representative of 18th-century Virginia tobacco plantations. The area has been restored, planted and maintained with farm buildings, groves of trees, livestock, gardens, and crops of tobacco and wheat, to represent the environment Washington knew here as a boy. 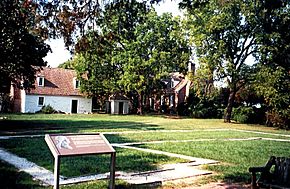 George Washington's great-grandfather settled this plantation in 1657 at the original property on Bridges Creek. The family acquired expanded land to the south toward nearby Popes Creek where the first section of the house in which George Washington was born was built before 1718 and enlarged by his father between 1722–1726. It was further enlarged by the mid-1770s to a ten-room house, known as "Wakefield". This house, which George Washington in 1792 would describe as "the ancient mansion seat," was destroyed by fire and flood on Christmas Day, 1779, and never rebuilt.

Thirty-two graves of Washington family members have been found at the Bridges Creek cemetery plot, including George's half-brother, father, grandfather, and great-grandfather.

Washington's father cultivated tobacco on his several plantations, which was labor-intensive, involving the work of enslaved Africans and African Americans. By the time George Washington was born, the population of the Virginia colony was 50 percent black, most of whom were enslaved. "20 or so" slaves worked on the small tobacco farm at Popes Creek, during the time that Washington lived there. 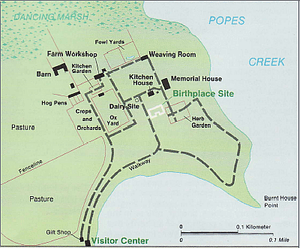 ln 1858, the Commonwealth of Virginia acquired the property to preserve the homesite and cemetery, but the Civil War intervened. Virginia donated the land to the federal government in 1882.

The Wakefield National Memorial Association was formed in 1923 to restore the property. In 1930, the grounds were authorized as a U.S. National Monument and, in 1931, the Wakefield Association received a grant from John D. Rockefeller, Jr., to acquire and transfer a total of 394 acres (1.59 km2) of land to the Federal government.

Since the exact appearance of the original Washington family home is not known, a Memorial House was designed by Edward Donn, Jr., representing similar buildings of the era and constructed on the approximate site in 1931. The actual location of Washington's boyhood home is adjacent to the memorial house and its foundation is outlined in the ground by crushed oyster shells.

Constructed as a memorial to George Washington in 1930–1931, the Memorial House is not an exact replica of his birthplace. Rather, it represents a typical upper-class house of the period. The Memorial House is constructed of bricks handmade from local clay. It has a central hallway and four rooms on each floor, furnished in the 1730–1750 period style by the Wakefield National Memorial Association. A tea table is believed to have been in the original house. Most of the other furnishings are more than 200 years old.

The park and Memorial House were opened by the National Park Service in 1932, on the 200th anniversary of George Washington's birth. 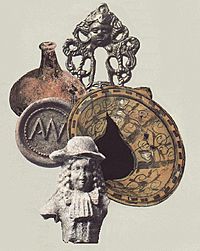 In the 21st century, the Monument is part of the National Park Service's ongoing efforts to interpret historical resources. In addition to the Memorial House, park facilities open to visitors include the historic birthplace home area, Kitchen House, hiking trails, and picnic grounds. In the Kitchen House, costumed re-enactors demonstrate candle- and soap-making. A Colonial Herb and Flower Garden, having plants common to Washington's time, such as thyme, sage, basil, and other herbs, flowers such as hollyhocks, forget-me-nots, and roses, as well as trees and bushes that date to Washington's time, may be viewed. The Colonial Living Farm, with a barn and pasture, raises livestock, poultry, and crops of the 18th century variety, using farming methods common then.

The Visitors' Center contains artifacts recovered from the burned-down Washington house, such as those pictured at right (clockwise, from right): a bowl, clay figurine, wine bottle seal belonging to Augustine Washington, wine bottle, and keyhole plate.

A 15-minute film depicting Washington family life is shown in a theater at the Visitors' Center. 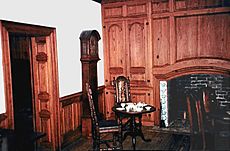 Stratford Hall Plantation, the birthplace of Robert E. Lee, and the town of Montross are nearby.

All content from Kiddle encyclopedia articles (including the article images and facts) can be freely used under Attribution-ShareAlike license, unless stated otherwise. Cite this article:
George Washington Birthplace National Monument Facts for Kids. Kiddle Encyclopedia.