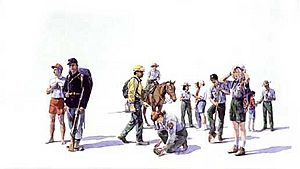 Depicts twelve figures, most in NPS uniforms, shown in occupations from left to right: a lifeguard, a Civil War reenactor, fire management, mounted patrol, researcher and/or natural resources with fish, a female ranger with two visitors, a laborer, a climber/rescuer, and a youth with a male ranger.

The office opened in 1916. The United States Secretary of the Interior appoints a director to head the office in Washington, D.C.

There are more than 400 areas in the National Park System. Of these, 59 are national parks.

The Service also keeps the National Register of Historic Places.

All content from Kiddle encyclopedia articles (including the article images and facts) can be freely used under Attribution-ShareAlike license, unless stated otherwise. Cite this article:
National Park Service Facts for Kids. Kiddle Encyclopedia.