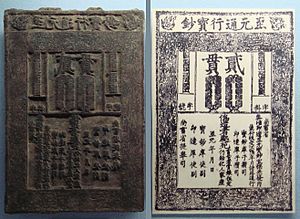 Fiat money is legal tender, or currency (bank notes and coins), which has value only because a government says so, and because the people using it maintain faith in it having value. Fiat money such as US dollars can be used as an exchange for goods and services.

The point is that other kinds of money have been used. Fiat money differs from commodity money and representative money. Commodity money is based on a "good", often a precious metal such as gold or silver, which is desired or has other uses. Representative money is a claim on the commodity rather than the actual good. In that case, the gold stays in a bank, and its ownership changes from time to time as the money is used. Why might a good be used at all? One reason is that governments cannot just make it. It is said that this stops inflation because, with fiat money, governments can just print more.

Some economists argue that an economy can only grow if it can produce more capital goods and not more money in the form of credit. This means that good economies must produce things rather than borrow money to buy things produced in other countries.

Alan Greenspan was an early critic of fiat money arguing that "Deficit spending is simply a scheme for the confiscation of wealth". He thought the value of money should be backed by gold.

All content from Kiddle encyclopedia articles (including the article images and facts) can be freely used under Attribution-ShareAlike license, unless stated otherwise. Cite this article:
Fiat money Facts for Kids. Kiddle Encyclopedia.