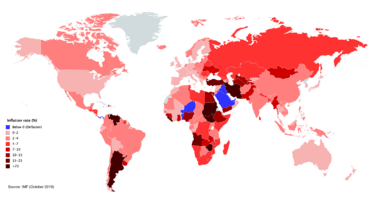 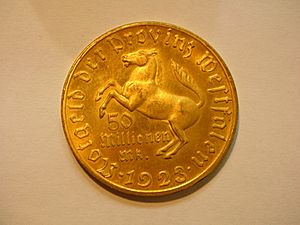 A coin worth 50 million Reichsmarks 1923

Inflation means that the general level of prices is going up, the opposite of deflation. More money will need to be paid for goods (like a loaf of bread) and services (like getting a haircut at the hairdresser's). Economists measure inflation regularly to know an economy's state. Inflation changes the ratio of money towards goods or services; more money is needed to get the same amount of a good or service, or the same amount of money will get a lower amount of a good or service. Economists defined certain customer baskets to be able to measure inflation. There can be positive and negative effects of inflation.

When the total money in an economy (the money supply) increases too rapidly, the quality of the money (the currency value) often decreases. Economists generally think that the increased money supply (monetary inflation) causes the price of goods/services price to increase (price inflation) over a longer period. They disagree on causes over a shorter period.

The Demand-Pull inflation theory can be said simply "too much money chasing too few goods." In other words, if the will of buying goods is growing faster than amount of goods that have been made, then prices will go up. This is most likely happens in economies that are growing fast.

Whenever a product is bought or sold beyond its real price for its worth, then Inflation of money occurs. If a company, for example, makes a small amount of goods which are sold over high quantity then it has to increase the prices so that it can manage the product quantity.

The Cost-Push inflation theory says that when the cost of making goods (which are paid by the company) go up, they have to make prices higher to make profit out of selling that product. The higher costs of making goods can include things like workers' wages, taxes to be paid to the government or bigger costs of raw materials from other countries.

However, Austrian School economists think this is wrong, because if people have to pay higher prices, this just means they have less to spend on other things.

Almost everyone thinks excessive inflation is bad. Inflation affects different people in different ways. It also depends on whether inflation is expected or not. If the inflation rate is equal to what most people are expecting (anticipated inflation), then we can adjust and the cost is not as high. For example, banks can change their interest rates and workers can negotiate contracts that include automatic wage hikes as the price level goes up.

Problems arise when there is unanticipated inflation:

All content from Kiddle encyclopedia articles (including the article images and facts) can be freely used under Attribution-ShareAlike license, unless stated otherwise. Cite this article:
Inflation Facts for Kids. Kiddle Encyclopedia.