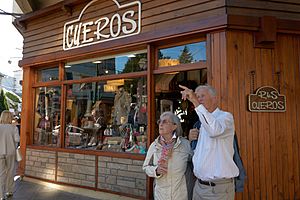 Retirement is when people stop working. People may retire when they reach a certain age, or if they get sick or have an accident, or even for their own choice. Some people may semi-retire and keep some sort of job.

A person may retire at whatever age they please. However, a country's tax laws or state old-age pension rules usually mean that in a given country a certain age is thought of as the "standard" retirement age. As life expectancy increases and more and more people live to an advanced age, in many countries the age at which a pension is awarded has been increased in the 21st century, often progressively.

The "standard" retirement age varies from country to country but it is generally between 50 and 70 (according to latest statistics, 2011). In some countries this age is different for men and women, although this has recently been challenged in some countries (e.g., Austria), and in some countries the ages are being brought into line. The table below shows the variation in eligibility ages for public old-age benefits in the United States and many European countries, according to the OECD.

The retirement age in many countries is increasing, often starting in the 2010s and continuing until the late 2020s.

1 In Denmark, early retirement is called efterløn and there are some requirements to be met. Early and normal retirement ages vary according to the date of birth of the person filing for retirement.

2 In France, the retirement age was 60, with full pension entitlement at 65; in 2010 this was extended to 62 and 67 respectively, increasing progressively over the following eight years.

3 In Latvia, the retirement age depends on the date of birth of the person filing for retirement.

In the United States, while the normal retirement age for Social Security, or Old Age Survivors Insurance (OASI) was age 65 to receive unreduced benefits, it is gradually increasing to age 67 by 2027. Public servants are often not covered by Social Security but have their own pension programs. Police officers in the United States may typically retire at half pay after 20 years of service, or three-quarter pay after 30 years, allowing retirement from the early forties. Military members of the US Armed Forces may elect to retire after 20 years of active duty. Their retirement pay (not a pension since they can be recalled to active duty at any time) is calculated on number of years on active duty, final pay grade and the retirement system in place when they entered service. Members awarded the Medal of Honor qualify for a separate stipend. Retirement pay for military members in the reserve and US National Guard is based on a point system.

All content from Kiddle encyclopedia articles (including the article images and facts) can be freely used under Attribution-ShareAlike license, unless stated otherwise. Cite this article:
Retirement Facts for Kids. Kiddle Encyclopedia.