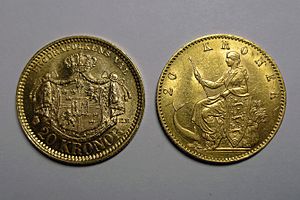 Two golden 20 kr coins from the Scandinavian Monetary Union, which was based on a gold standard. The coin to the left is Swedish and the right one is Danish.

This is all the Swedish money there is.

*Not in use since:
**Not known when ended.

On December 18 2008, the Swedish Riksbank asked to phase out the 50 öre, the final öre coin, by 2010. Note, however that the öre would remain as a subdivision unit for electronic payments

The Riksbank decided in 17 February 2010, to recommend the parliament to allow it to issue a 2-krona coin and a 200-krona note, the latter a new denomination for the country. However it did not recommend replacing the 20-krona note with a coin.

All content from Kiddle encyclopedia articles (including the article images and facts) can be freely used under Attribution-ShareAlike license, unless stated otherwise. Cite this article:
Swedish krona Facts for Kids. Kiddle Encyclopedia.