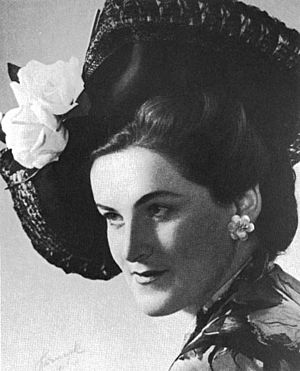 Märta Birgit Nilsson (17 May 1918 – 25 December 2005) was a celebrated Swedish dramatic soprano. Although she sang a wide repertory of operatic and vocal works, Nilsson was best known for her performances in the operas of Richard Wagner and Richard Strauss. Her voice was noted for its overwhelming force, bountiful reserves of power, and the gleaming brilliance and clarity in the upper register.

Nilsson made such strong imprints on many roles that they came to be known as the "Nilsson repertory". She sang the operas of Richard Strauss and made a specialty of Puccini's Turandot, but it was the music of Wagner that made her career. She once said that Isolde made her famous and Turandot made her rich. Her olympian command of his music was comparable to that of Kirsten Flagstad, who owned the Wagner repertory at the Metropolitan Opera during the years before World War II.

All content from Kiddle encyclopedia articles (including the article images and facts) can be freely used under Attribution-ShareAlike license, unless stated otherwise. Cite this article:
Birgit Nilsson Facts for Kids. Kiddle Encyclopedia.