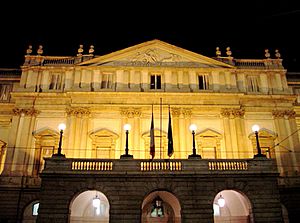 The Teatro alla Scala in Milan, by night.

The Teatro alla Scala, usually known as La Scala, is probably the most famous opera house in the world. It is in Milan, Italy, which is the country where opera started at the beginning of the 17th century. The theatre opened on 3 August 1778. At first it was called Nuovo Regio Ducal Teatro alla Scala. The first opera to be performed there was Salieri's Europa riconosciuta.

Building of the theatre

There had been a theatre there before, called Teatro Ducale, but it had been destroyed by fire in 1776. The new theatre was built where there had been a church called Santa Maria della Scala. This is how the theatre got its name.

The theatre had more than 3,000 seats arranged in six tiers (six storeys) of boxes, and above that the two 'loggione' or galleries. It has a very large stage. The money for the building was found by selling the 'palchi' (boxes) to wealthy noblemen and other rich people in Milan. In the 'platea' (the main floor) there were no seats and the audience there stood up to watch, like they do today in the Royal Albert Hall at the Proms. The orchestra could be seen very well as they were not in an orchestra pit like they are today.

Above the boxes, La Scala has always had a gallery where people who are not so rich can watch. This is still there today. It is called the loggione. Some people in the loggione, known as the Claque, are known to applaud wildly if they like a singer, or boo loudly if they do not like a singer. During La Scala’s history this has often been because of bribery or blackmail.

La Scala was originally lit with 84 oil lamps mounted on the palcoscenico (ceiling) and another thousand in the rest of theater. In case they ever caught fire, several rooms were filled with hundreds of water buckets. Later, oil lamps were replaced by gas lamps. In 1883 electric lights were put in.

The building was renovated in 1907. After that it had 2,800 seats as it does today. In 1943, during World War II, La Scala was badly damaged by bombing. It was rebuilt and reopened on 11 May 1946, with a brilliant concert conducted by Arturo Toscanini, with a soprano solo by Renata Tebaldi.

Many famous operas were first performed at La Scala, including some by Giuseppe Verdi. For several years, however, Verdi did not allow his music to be played here because he did not like the way the orchestra had played it. However the composer later conducted his Requiem there on May 25, 1874, and in 1886 announced that La Scala would host the premiere of his opera Otello. The first performance of his last opera, Falstaff was also given in this theatre. 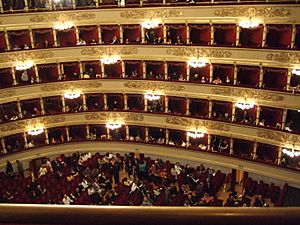 There is also a La Scala Museum (Museo Teatrale alla Scala) which has an extraordinary collection of paintings, drafts, statues, costumes, and other documents about opera and La Scala's history.

Recently there have been more renovations to La Scala. Some people were worried that it would spoil the historic building, but the opera company were very pleased when the work was done. There was a new stage and lots more room behind the stage. The heavy red carpets were taken away and the sound was better. The seats include monitors so that the audience can follow the words in English or Italian if it is in a foreign language (not Italian). The renovated opera house was opened on 7 December 2004 with the same opera by Salieri that had opened it in 1778. The conductor was Riccardo Muti.

All content from Kiddle encyclopedia articles (including the article images and facts) can be freely used under Attribution-ShareAlike license, unless stated otherwise. Cite this article:
La Scala Facts for Kids. Kiddle Encyclopedia.