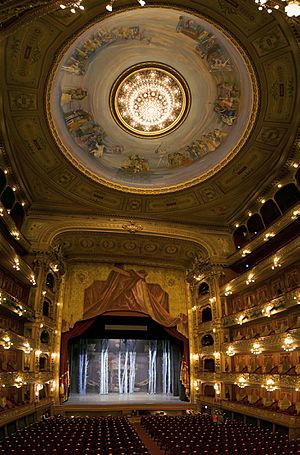 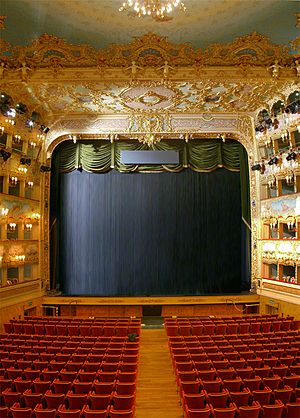 The inside of the Teatro La Fenice in Venice

An opera house is a building where operas and ballets are performed. It is similar to a theatre.

The first opera houses were built in the 1630s in Italy, about thirty years after the first operas were written. Traditionally they have a stage where the action takes place and a proscenium archway with a curtain that can be drawn back when the performance begins. In front of the stage is an orchestra pit which is a little lower than the stage so that the audience can still see the stage. The audience sit in the auditorium which is often horse-shoe shaped. The downstairs seats are called “stalls”. Round the stalls there are two or three tiers (storeys) of boxes. Each box can seat a small number of people. At the top towards the back there is a balcony and often a gallery along the sides as well. Some seats in the gallery may have restricted view (it is not possible to see all of the stage).

Some of the most famous opera houses in the world are Teatro alla Scala (or “La Scala”) in Milan, the Royal Opera House in Covent Garden, London, the Metropolitan Opera House in New York, the War Memorial Opera house in San Francisco, the Bolshoi Theatre in Moscow and the Sydney Opera House in Sydney which is a very modern building.

All content from Kiddle encyclopedia articles (including the article images and facts) can be freely used under Attribution-ShareAlike license, unless stated otherwise. Cite this article:
Opera house Facts for Kids. Kiddle Encyclopedia.