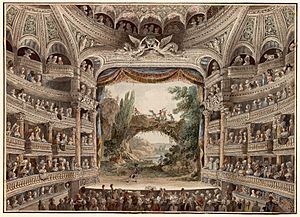 A theatre stage in France

In theatre and performing arts, the stage (sometimes referred to as the deck in stagecraft) is a designated space for the performance of productions. The stage serves as a space for actors or performers and a focal point (the screen in cinema theaters) for the members of the audience. As an architectural feature, the stage may consist of a platform (often raised) or series of platforms. In some cases, these may be temporary or adjustable but in theaters and other buildings devoted to such productions, the stage is often a permanent feature.

All content from Kiddle encyclopedia articles (including the article images and facts) can be freely used under Attribution-ShareAlike license, unless stated otherwise. Cite this article:
Stage (theatre) Facts for Kids. Kiddle Encyclopedia.