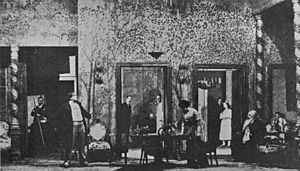 In a box set, such as this one used in a 1904 Moscow Art Theatre production of Anton Chekhov's The Cherry Orchard, three walls are provided by on-stage scenery while the invisible fourth wall is provided by the proscenium arch.

The fourth wall is not the same as a soliloquy. A soliloquy is a dramatic device used by playwrights where the character on stage gives a monologue which gives the audience insight into their thoughts.

The acceptance of the transparency of the fourth wall is part of the suspension of disbelief between a fictional work and an audience. It allows them to enjoy the fiction as if they were observing real events. Although the critic Vincent Canby described it in 1987 as "that invisible scrim that forever separates the audience from the stage".

The metaphor of the fourth wall has been used by the actor Sir Ian McKellen to describe the work of the painter L. S. Lowry:

"... stood across the road from his subjects and observed. Often enough there are a number of individuals in a crowd peering back at him. They invite us momentarily into their world, like characters on a stage sometimes do, breaking the fourth-wall illusion."

McKellen said that "Lowry’s mid-air viewpoint is like a view from the dress circle", looking down as if to a stage. And, McKellen argues, Lowry "often marks the limits of the street scene with curbstones or a pavement that feel like the edge of the stage where the footlights illuminate the action."

The metaphor of the fourth wall has been used by literary critic David Barnett to The Harvard Lampoon's parody of The Lord of the Rings. He says a character breaks the rules of storytelling by referring to the text itself. The character Frodo observes "it was going to be a long epic", which in Barnett's view "breaks the fourth wall.

Woody Allen broke the fourth wall several times in his movie Annie Hall. Allen explained, "because I felt many of the people in the audience had the same feelings and the same problems. I wanted to talk to them directly and confront them."

Akira Kurosawa also broke the fourth wall at the end of his neorealistic drama One Wonderful Sunday.

Fourth wall breaks are also used for comedic effect. Mel Brooks breaks the fourth wall in many of his movies, sometimes literally. In Blazing Saddles, the climactic fight scene between the townspeople and the outlaws was so big that it literally breaks into other parts of the movie studio.

On television, breaking the fourth wall is rare. It has been done throughout the history of the medium. George Burns did it many times on the 1950s sitcom he starred in with his real-life wife Gracie Allen. It's Garry Shandling's Show and Mrs Brown's Boys both have their title character walking between sets mid-scene. The latter shows characters re-doing the same scenes over when they missed a line of the dialogue. Another television character who regularly breaks the fourth wall is Francis Urquhart in the British TV drama series House of Cards, To Play the King and The Final Cut. Urquhart talks to the audience several times during each episode. He gives the viewer comments on his own actions on the show. The same technique is also used in the American adaptation of House of Cards.

All content from Kiddle encyclopedia articles (including the article images and facts) can be freely used under Attribution-ShareAlike license, unless stated otherwise. Cite this article:
Fourth wall Facts for Kids. Kiddle Encyclopedia.