Mel Brooks (born June 28, 1926) is a Jewish American actor, comedian, writer, movie director, and producer. When he was born in Brooklyn, his name was Melvin Kaminsky.

He has directed, produced and written several movies. Most of these are comedies that make references to other movies. 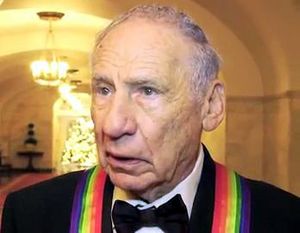 Brooks at the White House for the 2009 Kennedy Center Honors

Brooks is one of the few artists who have received an Oscar, Emmy, Tony, and Grammy. He was awarded his first Grammy for Best Spoken Comedy Album in 1999 for his recording of The 2000 Year Old Man in the Year 2000 with Carl Reiner. His two other Grammys came in 2002 for Best Musical Show Album for the soundtrack of The Producers and for Best Long Form Music Video for the DVD "Recording the Producers - A Musical Romp with Mel Brooks". He won his first of four Emmy awards in 1967 for Outstanding Writing Achievement in Variety for a Sid Caesar special. He went on to win three Emmys in 1997, 1998, and 1999 for Outstanding Guest Actor in a Comedy Series for his role of Uncle Phil on Mad About You. He won his three Tony awards in 2001 for his work on the musical, The Producers for Best Musical, Best Original Musical Score, and Best Book of a Musical. He also won a Hugo Award and a Nebula Award for Young Frankenstein. Three of Brooks's movies are on the American movie Institute's list of funniest American films: Blazing Saddles (#6), The Producers (#11), and Young Frankenstein (#13).

On December 5, 2009 Brooks was one of five recipients of the 2009 Kennedy Center Honors at the John F. Kennedy Center for the Performing Arts in Washington, D.C. 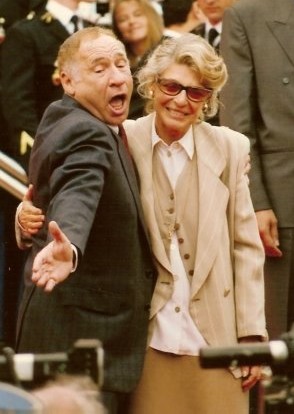 Brooks with wife Anne Bancroft at the 1991 Cannes movie Festival. 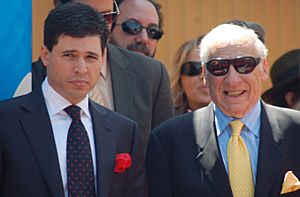 Brooks was married to Florence Baum from 1953 to 1962. Their marriage ended in divorce. Mel and Florence had three children, Stephanie, Nicky, and Eddie.

Brooks was married to the actress Anne Bancroft from 1964 until her death from uterine cancer on June 6, 2005. They met at a rehearsal for the Perry Como Variety Show in 1961 and married three years later. Their son, Max Brooks, was born in 1972. In 2010, Brooks said Bancroft was the main force behind his involvement in making The Producers and Young Frankenstein for the musical theater.

All content from Kiddle encyclopedia articles (including the article images and facts) can be freely used under Attribution-ShareAlike license, unless stated otherwise. Cite this article:
Mel Brooks Facts for Kids. Kiddle Encyclopedia.