John Franklin Candy (October 31, 1950 – March 4, 1994) was a Canadian comedian and actor known mainly for his work in Hollywood films.

Candy rose to fame as a member of the Toronto branch of the Second City and its related Second City Television series, and through his appearances in such comedy films as Stripes, Splash, Cool Runnings, Home Alone, Spaceballs, and Uncle Buck, as well as more dramatic roles in Only the Lonely and JFK.

One of his most renowned onscreen performances was as Del Griffith, the talkative shower-curtain ring salesman in the John Hughes comedy Planes, Trains and Automobiles.

While filming the Western parody Wagons East!, Candy died of a heart attack in Durango, Mexico, on March 4, 1994, aged 43. His final two films, Wagons East! and Canadian Bacon, are dedicated to his memory.

Candy was born in 1950 in Newmarket, Ontario. He was brought up in a working-class Roman Catholic family. Candy's father was of English and Scottish descent, while his mother was of Polish and Ukrainian descent.

His first film role was a small, unaccredited appearance in the 1973 film Class of '44. He appeared in several other low-budget films during the 1970s. In 1976 he gained wide North American popularity when he became a cast member on the influential Toronto-based comedy-variety show Second City Television. NBC picked the show up in 1981 and it quickly became a fan favourite. It won Emmy Awards for the show's writing in 1981 and 1982. 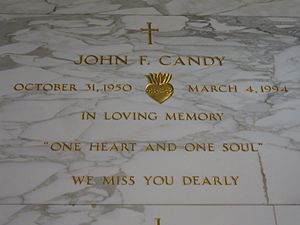 In 1994, while on vacation from film production (Wagons East!) in Durango City, Mexico, Candy called his co-stars from his hotel, then went to sleep. Some time after midnight, on March 4, 1994, Candy was found dead from a presumed myocardial infarction even though this was unproven, as no autopsy was performed. He was 43 years old. The heavyset Candy had struggled for some years with weight-related health issues.

Candy's funeral was held at St. Martin of Tours Catholic Church in Los Angeles. Candy was entombed in the mausoleum at Holy Cross Cemetery in Culver City, California. His crypt lies just above fellow actor Fred MacMurray. On March 18, 1994, a special memorial service for Candy, produced by his former improvization troupe, the Second City, was broadcast across Canada.

All content from Kiddle encyclopedia articles (including the article images and facts) can be freely used under Attribution-ShareAlike license, unless stated otherwise. Cite this article:
John Candy Facts for Kids. Kiddle Encyclopedia.