Culver City is a city in Los Angeles County, California. The city was named after its founder, Harry Culver. As of the 2010 census, the city had a population of 38,883. It is mostly surrounded by the city of Los Angeles, but also shares a border with unincorporated areas of Los Angeles County. Over the years, it has annexed more than 40 pieces of adjoining land and now comprises about five square miles.

Since the 1920s, Culver City has been a center for motion picture and later television production, best known as the home of Metro-Goldwyn-Mayer studios. From 1932 to 1985, it was the headquarters for the Hughes Aircraft Company. National Public Radio West and Sony Pictures Entertainment have headquarters in the city. The NFL Network studio is also based in Culver City.

Archaeological evidence suggests a human presence in the area of present-day Culver City since at least 8,000 BC. The region was the homeland of the Tongva-Gabrieliño Native Americans, who held a presence in the region for over 8,000 years.

In 1861, during the American Civil War, Camp Latham was established by the 1st California Infantry under Col. James H. Carleton and the 1st California Cavalry under Lt. Col. Benjamin F. Davis. Named for California Senator Milton S. Latham, the camp was the first staging area for the training of Union troops and their operations in Southern California. It was located on land of the Rancho La Ballona, on the South side of Ballona Creek, near what is now the intersection of Jefferson and Overland Boulevards. The post was later moved to Camp Drum, which became the Drum Barracks.

Harry Culver first attempted to establish Culver City in 1913; the city was incorporated on September 20, 1917. (His first ads read "All roads lead to Culver City" indicating a main transportation route via the city.) The city was one of many all-white planned communities started in the Los Angeles area around this time.

The first film studio in Culver City was built by Thomas Ince in 1918. In 1919, silent film comedy producer Hal Roach built his studios there, and Metro Goldwyn Mayer (MGM) in the 20s. During Prohibition, speakeasies and nightclubs such as the Cotton Club lined Washington Boulevard.

Culver Center, one of Southern California's first shopping malls, was completed in 1950 on Venice Boulevard near the Overland Avenue intersection. Today, it has many retail stores, a supermarket, a Rite Aid department store, Best Buy, and several banks and restaurants.

Hughes Aircraft opened its Culver City plant in July 1941. There the company built the H-4 Hercules transport (commonly called the "Spruce Goose"). Hughes was also an active subcontractor in World War II. It developed and patented a flexible feed chute for faster loading of machine guns on B-17 bombers, as well as manufactured electric booster drives for machine guns. Hughes produced more ammunition belts than any other American manufacturer, and built 5,576 wings and 6,370 rear fuselage sections for Vultee BT-13 trainers.

Hughes grew after the war, and in 1953 Howard Hughes donated all of his stock in the company to the Howard Hughes Medical Institute. After he died in 1976, the institute sold the company, which made it the second-best-endowed medical research foundation in the world.

The Hal Roach Studios were demolished in 1963. In the late 1960s, much of the MGM backlot acreage (lot 3 and other property on Jefferson Boulevard), and the nearby 28.5-acre (11.5 ha) of the somewhat inaccurately named "back forty", once owned by RKO Pictures and later Desilu Productions, were sold by their owners. In 1976 the sets were razed to make way for redevelopment. Today the "back forty" is the southern expansion of the Hayden Industrial Tract, while the MGM property has been converted to a subdivision and a shopping center known as Raintree Plaza.

In the 1990s, Culver City launched a successful revitalization program in which it renovated its downtown as well as several shopping centers in the Sepulveda Boulevard corridor near Westfield Culver City. Around the same time, the relocation of Sony's motion picture operations known as Columbia Pictures. Columbia Pictures was the subsidiary of Sony that moved into the old MGM lot. This move to the former MGM studios at Washington Boulevard and Overland Avenue brought much-needed jobs to the city.

The influx of many art galleries and restaurants to the eastern part of the city, formally designated as the Culver City Art District, prompted The New York Times in 2007 to praise the new art scene and call Culver City a "nascent Chelsea."

In 2012 Roger Vincent of the Los Angeles Times said that, according to local observers, the city's "reputation as a pedestrian-friendly destination with upscale restaurants, gastropubs and a thriving art scene is less than a decade old."

The Culver City station of the Los Angeles Metro Expo Line sits at the Culver Junction near Venice and Robertson Boulevards in Culver City. The Expo Line provides a light rail connection from Culver City to Downtown Los Angeles in the east and Downtown Santa Monica in the west, mostly following the right-of-way that the Pacific Electric Santa Monica Air Line used, also known as the Exposition Blvd line by PE. Culver City Station was the western terminus of the Expo Line from its opening on June 20, 2012 to the opening of Expo Line phase two on May 20, 2016.

The city is served by the Los Angeles International Airport, which is located about 7 miles (11 km) south of the city. 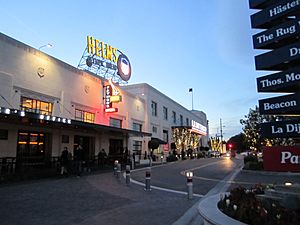 Museums and the arts 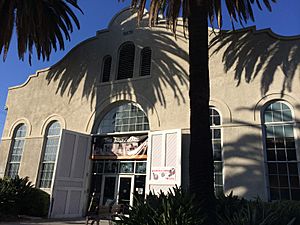 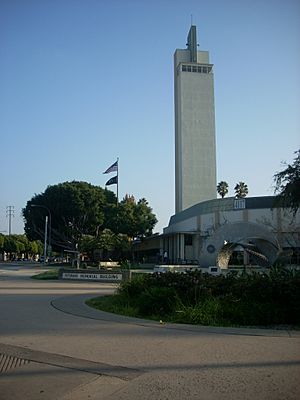 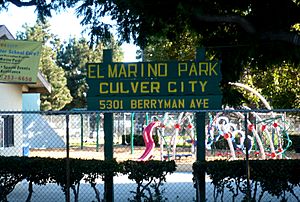 The city is surrounded by the Los Angeles neighborhoods of Mar Vista and Palms to the north; Westchester to the south; Mid-City and West Adams to the east; the Baldwin Hills and Ladera Heights unincorporated areas to the southeast; and the L.A. neighborhoods of Venice and Playa Vista to the west, along with the unincorporated area of Marina Del Rey.

The two primary ZIP codes for Culver City are 90230 and 90232. Because ZIP codes do not necessarily follow city boundaries, a portion of Culver City is in the 90066 ZIP code, which also serves some of the Mar Vista neighborhood of the city of Los Angeles.

The major geographic feature of Culver City is Ballona Creek, which runs northeast to southwest through most of the city before it drains into Santa Monica Bay in Marina Del Rey.

Culver City is served by the San Diego, Santa Monica, and Marina freeways.

Culver City has a Mediterranean climate, typical of coastal California.

According to the 2010 United States Census, Culver City had a median household income of $77,333, with 7.1% of the population living below the federal poverty line.

There were 16,611 households out of which 26.1% had children under the age of 18 living with them, 40.8% were married couples living together, 12.8% had a female householder with no husband present, and 42.7% were non-families. 34.5% of all households were made up of individuals and 9.3% had someone living alone who was 65 years of age or older. The average household size was 2.31 and the average family size was 3.02.

All content from Kiddle encyclopedia articles (including the article images and facts) can be freely used under Attribution-ShareAlike license, unless stated otherwise. Cite this article:
Culver City, California Facts for Kids. Kiddle Encyclopedia.