Ivy Substation (also known as the Ivy Park Substation or Culver Substation) is a 99-seat theatre in Culver City, California which formerly housed power equipment for the nearby electric railways and Ivy station. It was listed on the National Register of Historic Places in 1981.

A single story, rectangular shaped building in the Mission Revival style, it was built in 1907 as a traction substation by the Los Angeles Pacific Railway which subsequently became part of the Pacific Electric railway in 1911. Made of brick covered in stucco, the large interior once held old style rotary mechanical rectifiers to convert very high voltage alternating current (AC) to 600 volt direct current (DC) to operate run cars for serve nearby streetcar and interurban lines: the PE's Venice Short Line, Redondo Beach via Playa del Rey Line, and Santa Monica Air Line. 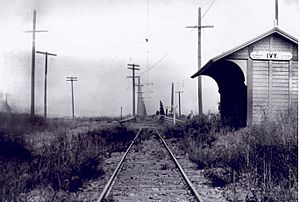 The building was listed in the National Register of Historic Places because of its association with the transportation history of Los Angeles as well as for its architecture.

All content from Kiddle encyclopedia articles (including the article images and facts) can be freely used under Attribution-ShareAlike license, unless stated otherwise. Cite this article:
Ivy Substation Facts for Kids. Kiddle Encyclopedia.