The main part of Westchester is flanked by Playa Vista and Culver City on the north, Inglewood and Lennox on the east, Del Aire and El Segundo on the south and Playa del Rey on the west. It includes all of the Los Angeles International Airport. There is also a two-block-wide shoestring district that runs from the intersection of Centinela Avenue and La Cienega Boulevard north to 63rd Street and then east to Overhill Avenue, where it links with the Hyde Park neighborhood.

Nearby areas, not necessarily adjacent:

Westchester began the 20th century as an agricultural area, growing a wide variety of crops in the dry, farming-friendly climate. The rapid development of the aerospace industry near Mines Field (as LAX was then known), the move of then Loyola University to the area in 1928, and population growth in Los Angeles as a whole, created a demand for housing in the area. Westchester hosted the cross country part of the eventing equestrian event for the 1932 Summer Olympics in Los Angeles.

In the late 1930s, real estate magnate Fritz Burns and his partner Fred W. Marlow developed a tract of inexpensive prefabricated single-family homes on the site of a former hog farm at the intersection of Manchester and Sepulveda Boulevards. This community, dubbed "Westchester", grew by leaps and bounds as the aerospace industry boomed in World War II and afterward. A Los Angeles Times article in 1989 described the development as "a raw suburb", "created willy-nilly in the 1940s".

The area was predominantly residential. When the area had 30,000 residents, it was still lacking a police station, fire station, or hospital. It lacked a barber shop even by 1949.

The 1960s saw the introduction of airliners that could make trans-Pacific flights without refueling, causing a massive increase in air traffic at LAX. When the North Airfield Complex was constructed the increase in noise from jet takeoffs greatly decreased the desirability of the residential areas adjoining LAX. In response, the city of Los Angeles began a program of purchasing and condemning houses from noise-weary homeowners; as a result, a number of streets just north of the airport have been decommissioned, and the homes along those streets demolished. In all, Westchester lost 4,500 homes and 14,000 residents. The 18-hole Westchester golf course became a 15-hole course. In 2007 Los Angeles World Airport (LAWA) proposed another move of the North runway into Westchester, local opposition to LAX expansion (first proposed in the late 1990s) rose to fever pitch.

In February 2010, a NASA panel found that the North runway was safe and should stay as it is. That same month, LAWA broke ground on a $1.5 billion expansion of the Bradley International Terminal.

Home prices rose 25 percent in 2013-14 while most southern California communities were recovering much slower. A major factor has been the influx of technology companies in Playa Vista as the Silicon Beach phenomena in west Los Angeles has spread. The community also experienced a boom in home additions or complete rehabilitation of traditional postwar Ranch-style house into larger two-story homes. The Howard Hughes Center was a significant addition to the neighborhood in 2001 next to the San Diego Freeway. Development continued till by 2015 the complex had 1.3 million square feet of office space (120,000 square metres) in high-rise buildings, 3,200 apartments, and an updated, renovated shopping mall.

A total of 39,480 people lived in Westchester's 10.81 square miles, according to the 2010 U.S. census, and that figure included the uninhabited acreage of the Los Angeles International Airport—resulting in a density of 3,652 people per square mile, among the lowest population densities in the city of Los Angeles but about average for the county. The median age was 35.6, about average for Los Angeles city. The percentage of people from age 19 through 34 was among the county's highest.

In 2010, the mean family income (dollars) for the area was $135,026 and the median family income (dollars) was $106,302, both numbers high for the city. The percentages of families that earned more than $100,000 a year was 53.5%. Renters occupied 48.2% of the housing units, and homeowners occupied the rest. The average household size was 2.3 people, considered low for the city and county. The percentages of divorced men (8.6%) and divorced women (11.9%) were among the county's highest.

The 2,000 census counted 3,055 military veterans, 9.2% of the population, considered a high percentage for the city of Los Angeles but about average for the county.

The Westchester Senior Citizen Center has a 200-person auditorium, barbecue pits, a 20-person community room, a garden, a kitchen, picnic tables, and a stage. The 8-acre (3.2 ha) Carl E. Nielsen Youth Park is located in Westchester. In 1991, Los Angeles World Airports planned to pave over the park and use the lot as parking spaces and leased space to rental car companies. During that year, LAWA decided to keep the park open. 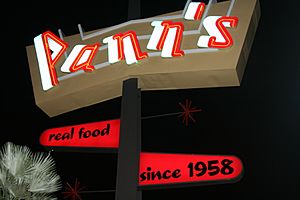 Pann's restaurant, at 6710 La Tijera Boulevard, is "probably the best-preserved example" of the Googie-style architecture developed by Eldon Davis. Pann's includes an angular edifice and large plate-glass windows and has been described as having "the classic coffee shop architecture". Pann's was featured in a story in the Los Angeles Times, "Going on a hunt for Googie architecture," which noted the restaurant's tilted roof and sign, tropical plants and exposed stone walls indoors and out, and glass windows wrapping around the restaurant. Pann's celebrated its 50th anniversary in 2008. 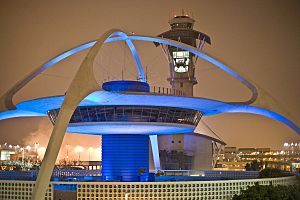 The Theme Building opened in 1961

The Theme Building is a structure at the Los Angeles International Airport which opened in 1961 and is another example of Googie architecture. It was said that the distinctive white building resembles a flying saucer that had landed on its four legs. The Los Angeles City Council designated the building a cultural and historical monument (no.570) in 1993.

About 51.7% of Westchester's residents had completed a bachelor's degree or higher by 2010, a high figure when compared with the city and the county at large. The percentage of the residents who held a master's degree or a doctorate was also high for the county. 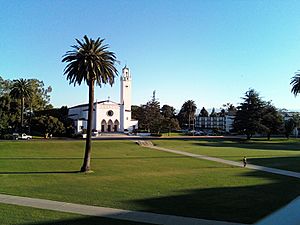 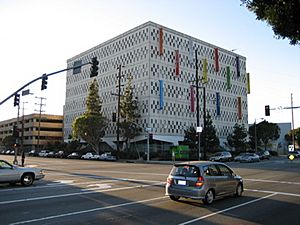 Otis College of Art and Design, before 2009

The schools within Westchester's boundaries are:

As of 2014 the Wiseburn School District allows parents in Westchester to send their children to Wiseburn schools on inter-district transfers.

All content from Kiddle encyclopedia articles (including the article images and facts) can be freely used under Attribution-ShareAlike license, unless stated otherwise. Cite this article:
Westchester, Los Angeles Facts for Kids. Kiddle Encyclopedia.