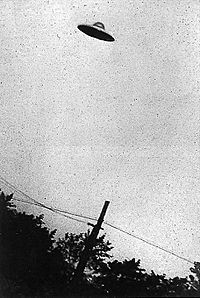 A UFO in New Jersey, USA 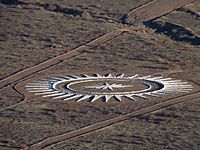 Even though UFOs can be anything, people often use the word UFO when they are talking about alien spacecraft. Flying saucer is another word that is often used to describe an unidentified flying object.

Studies estimate that 50-90% of all reported UFO sightings are identified later. Usually 10-20% are never identified. Studies also show that very few UFO sightings are hoaxes (people trying to trick other people). Most UFOs are actually natural or man-made objects that looked strange.

80-90% of IFOs are identified as one of three different things:

10-20% of IFOs are other causes (such as birds, clouds, mirages, searchlights, etc.)

All content from Kiddle encyclopedia articles (including the article images and facts) can be freely used under Attribution-ShareAlike license, unless stated otherwise. Cite this article:
Unidentified flying object Facts for Kids. Kiddle Encyclopedia.