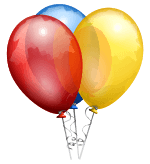 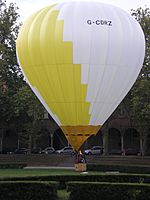 A balloon is a bag that is usually filled with gas. This gas can be helium, hydrogen, or air.

Balloons are used for many purposes.

Balloons can also be filled with water. They are called "water balloons". Water balloons are a kind of toy.

The rubber balloon was invented by Michael Faraday in 1824, during experiments with various gases. 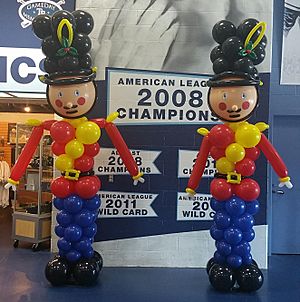 Decorations made of balloons with a combination of stacking and twisting techniques showcasing the deco-twisting style.

Balloons are used for decorating birthday parties, weddings, corporate functions, school events, and for other festive gatherings. The artists who use the round balloons to build are called "stackers" and the artists who use pencil balloons to build are called "twisters." Most commonly associated with helium balloon decor, more recently balloon decorators have been moving towards the creation of air-filled balloon decorations due to the non-renewable natural resource of helium limited in supply. The most common types of balloon decor include arches, columns, centerpieces, balloon drops, sculptures, and balloon bouquets. 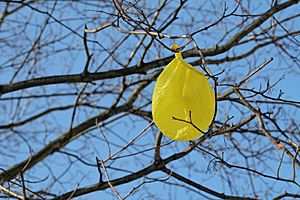 Deflated toy balloon in a tree.

Twisting balloons can be used to create decor centerpieces for events and to create a more unique look than can be provided by foil balloons.]]Often the term "Party Balloon" will refer to a twisting balloon or pencil balloon. These balloons are manipulated to create shapes and figures for parties and events, typically along with entertainment.

Filling the balloon with air can be done with the mouth, a manual or electric inflater (such as a hand pump), or with a source of compressed gas.

When rubber or plastic balloons are filled with helium so that they float, they typically retain their buoyancy for only a day or so, sometimes longer.

Even a perfect rubber balloon eventually loses gas to the outside. The process by which a substance or solute migrates from a region of high concentration, through a barrier or membrane, to a region of lower concentration is called diffusion. 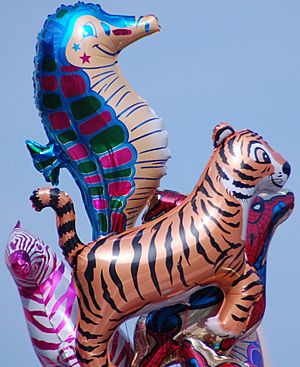 Beginning in the late 1970s, some more expensive (and longer-lasting) foil balloons made of thin, unstretchable, less permeable metallised films such as Mylar (BoPET) started being produced. These balloons have attractive shiny reflective surfaces and are often printed with color pictures and patterns for gifts and parties. The most important attribute of metallised nylon for balloons is its lightweight, increasing buoyancy and its ability to keep the helium gas from escaping for several weeks. Foil balloons have been criticized for interfering with power lines.

Modelling and use in art

Balloon artists are entertainers who twist and tie inflated tubular balloons into sculptures (see balloon modelling). The balloons used for sculpture are made of extra-stretchy rubber so that they can be twisted and tied without bursting. Since the pressure required to inflate a balloon is inversely proportional to the diameter of the balloon, these tiny tubular balloons are extremely hard to inflate initially. A pump is usually used to inflate these balloons. 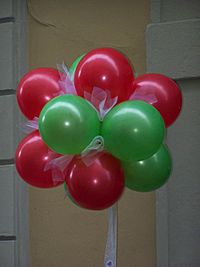 Balloons are used for publicity at major events. Screen printing processes can be used to print designs and company logos onto the balloons. Custom built printers inflate the balloon and apply ink with elastic qualities through a silk screen template.

Water balloons are thin, small rubber balloons filled with a liquid, usually water, instead of a gas, and intended to be easily broken. They are usually used by children, who throw them at each other, trying to get each other wet, as a game, competition, or practical joke. By forcing water out the open end of a water balloon, it is possible to use it as a makeshift water gun.

Solar balloons are thin, large balloons filled with air that is heated by the sun in order to decrease its density to obtain lift.

Balloons are often deliberately released, creating a so-called balloon rocket. Balloon rockets work because the elastic balloons contract on the air within them, and so when the mouth of the balloon is opened, the gas within the balloon is expelled out, and due to Newton's third law of motion, the balloon is propelled forward. This is the same way that a rocket works. 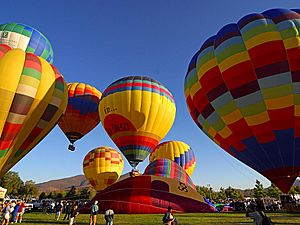 Balloons filled with hot air or a buoyant gas have been used as flying machines since the 18th century. The earliest flights were made with hot air balloons using air heated with a flame, or hydrogen as the lifting gas. Later, coal gas and later still helium were used. An unpowered balloon travels with the wind. A balloon which has an engine to propel it is called a dirigible balloon or airship.

Angioplasty is a surgical procedure in which very small balloons are inserted into blocked or partially blocked blood vessels near the heart. Once in place, the balloon is inflated to clear or compress arterial plaque, and to stretch the walls of the vessel, thus preventing myocardial infarction. A small stent can be inserted at the angioplasty site to keep the vessel open after the balloon's removal.

Balloon catheters are catheters that have balloons at their tip to keep them from slipping out. For example, the balloon of a Foley catheter is inflated when the catheter is inserted into the urinary bladder and secures its position.

Insertion of balloons subsequently filled with air or liquid can be used to stop bleeding in hollow internal organs such as the stomach.

All content from Kiddle encyclopedia articles (including the article images and facts) can be freely used under Attribution-ShareAlike license, unless stated otherwise. Cite this article:
Balloon Facts for Kids. Kiddle Encyclopedia.