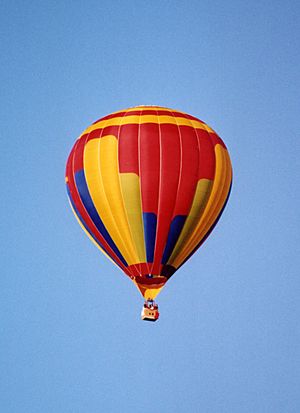 A balloon is a kind of aircraft that stays in the sky by floating. People fly in balloons mostly for fun.

The bottom of the balloon is called the "basket" where people can sit or stand.

The top of a balloon is a big cloth bag called the "envelope".

There are three kinds of balloon aircraft:

All content from Kiddle encyclopedia articles (including the article images and facts) can be freely used under Attribution-ShareAlike license, unless stated otherwise. Cite this article:
Balloon (aircraft) Facts for Kids. Kiddle Encyclopedia.