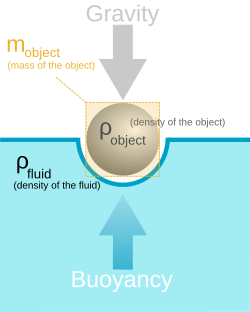 A diagram showing how buoyancy works.

In physics, buoyancy is a force on an object making that object rise or move upward. It comes from the Spanish word for "float", boyar. Buoyancy is made by the difference in pressure put on the object by the Fluid or air that the object is in.

The net upward buoyancy force is equal to the magnitude of the weight of fluid that is displaced by the body. This force enables the object to float or at least to seem lighter. Buoyancy is important for many vehicles such as boats, ships, balloons, and blimps.

If the object has exactly the same density as the liquid, then its buoyancy is the same as its weight. It will not sink or float.

If the object has a higher average density than the liquid, then its buoyancy is less than its weight. It will sink. That is why pebbles do not float.

If the object has a lower average density than the liquid, then its buoyancy is greater than its weight. That is why, although a ship may be made of steel which is more dense than water, it floats because it encloses a volume of air and the resulting shape has an average density less than that of the water.

All content from Kiddle encyclopedia articles (including the article images and facts) can be freely used under Attribution-ShareAlike license, unless stated otherwise. Cite this article:
Buoyancy Facts for Kids. Kiddle Encyclopedia.