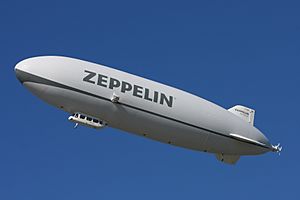 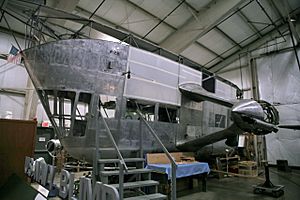 Airships are also known as dirigibles from the French dirigeable, meaning "steerable". The term airship is sometimes informally used to mean a machine capable of atmospheric flight. The term zeppelin is a genericized trademark that originally referred to airships manufactured by the Zeppelin Company.

In modern common usage, the terms zeppelin, dirigible and airship are used interchangeably for any type of rigid airship, with the terms blimp or airship alone used to describe non-rigid airships.

In the early days of airships, the primary lifting gas was hydrogen. Until the 1940s, most French, German, and British airships continued to use hydrogen because it offered greater lift and was cheaper than helium. However, hydrogen is flammable when mixed with air. The buoyancy provided by hydrogen is actually only about 10% greater than that of helium. So the issue became one of safety versus cost. 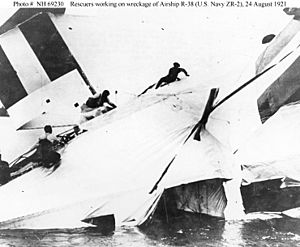 Initially airships met with great success and compiled an impressive safety record. The Graf Zeppelin, for example, flew over 1 million miles (including the first circumnavigation of the globe by air) without a single passenger injury. The expansion of airship fleets and the growing (sometimes excessive) self-confidence of airship pilots gradually made the limits of the type clear, however, and initial successes gave way to a series of tragic rigid airship accidents. In fact, with the exception of the Graf Zeppelin, most of the world's most famous airships eventually crashed.

Although USS Los Angeles flew successfully for 8 years, the U.S. Navy eventually lost all three of its American built rigid airships to accidents. USS Shenandoah flew into a thunderstorm over Ohio in 1925 and broke into pieces. USS Akron was caught by a microburst and driven down into the surface of the sea off the shore of New Jersey in 1933. Both storm-related losses led to great loss of life. USS Macon broke up after suffering a structural failure in its upper fin off the shore of Point Sur in California in 1935. 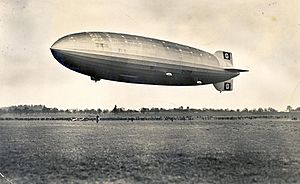 The Hindenburg, on a postcard from 1936

Britain suffered its own airship tragedy in 1930 when R 101, a ship far advanced for its time but rushed to completion and sent on a trip to India before she was ready, crashed in France with the loss of 48 out of 54 aboard. Because of the bad publicity surrounding the crash, the Air ministry grounded the competing R 100 in 1930 and sold it for scrap in 1931.

The most spectacular and widely remembered airship accident, however, is the burning of the Hindenburg on 6 May 1937, which caused public faith in airships to evaporate in favour of faster, more cost-efficient (albeit less energy-efficient) airplanes.

The airplane became the transport of choice also because it is less sensitive to wind. Aside from the problem of manoeuvring and docking in high winds, the trip times for an upwind versus a downwind trip of an airship can differ greatly, and even crabbing at an angle to a crosswind eats up ground speed. Those differences make scheduling difficult. 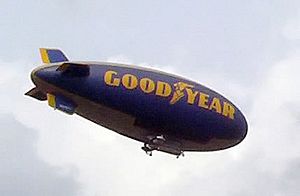 One of the Goodyear Tire and Rubber Company's blimp fleet

Although airships abandoned carrying passengers, they continued to be used for other purposes. In particular, the US Navy.

In recent years, the Zeppelin company has reentered the airship business. Their new model, designated the Zeppelin NT made its maiden flight on September 18, 1997. There are currently three NT aircraft flying. An airship was flown over Athens during the 2004 Summer Olympics as part of security anti-terrorism measures.

Blimps continue to be used for advertising and as TV camera platforms at major sporting events.

All content from Kiddle encyclopedia articles (including the article images and facts) can be freely used under Attribution-ShareAlike license, unless stated otherwise. Cite this article:
Airship Facts for Kids. Kiddle Encyclopedia.