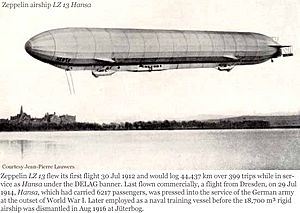 A Zeppelin is a type of airship. It is a dirigible, which means it is rigid airship, but can be directed. It was developed by Count Ferdinand von Zeppelin, in the early 20th century. The name Zeppelin is now used as a common name for all airships. Zeppelins were used in the First World War. In the Second World War the Nazis largely used them for propaganda purposes.

One of the most well-known Zeppelins was the LZ 129 Hindenburg, which caught fire on May 6, 1937, during a landing after a non-stop trip from Germany to New Jersey in the United States. Another, the LZ 130 Graf Zeppelin was still in use after this disaster although some modifications had to be made after the disaster. After the Second World War and the fall of the Nazis in Germany, Zeppelins were not used anymore. Plans exist to use Zeppelins to lift heavy weights. Sometimes, they are also used as tourist attractions, or for advertising.

All content from Kiddle encyclopedia articles (including the article images and facts) can be freely used under Attribution-ShareAlike license, unless stated otherwise. Cite this article:
Zeppelin Facts for Kids. Kiddle Encyclopedia.