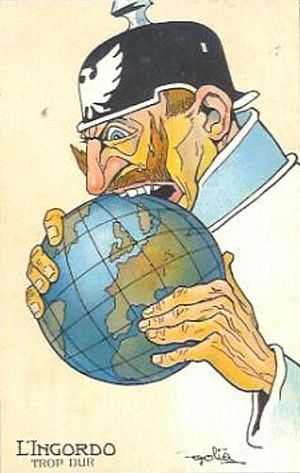 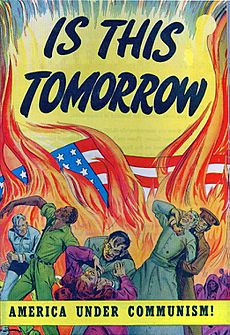 Anti-communist propaganda in a 1947 comic book published by the Catechetical Guild Educational Society warning of "the dangers of a Communist takeover".

The word 'propaganda' comes from Latin. At first, it meant 'ideas to be spread around'. But in the First World War, it came to mean political ideas that are supposed to be misleading.

Propaganda is like advertising in some ways. For example, it uses the mass media to spread its ideas. But advertising is usually trying to sell something, whereas propaganda is about ideas. It is often political, and used by states or political parties, not private companies.

When a country is not at war, propaganda can still be used. The government may use propaganda to change what people think about a political situation. A group may try to change the way people act towards an issue.

Propaganda under some countries, like dictatorships, is used along with censorship. While propaganda tries to give people ideas, censorship forces the ones who disagree with propaganda to keep quiet.

Propaganda is also used to win people by tricking them. Some people say that cults use propaganda to get people to join them.

Propaganda has been used in every known civilisation. It was used by Rameses II on his monuments in Ancient Egypt; it was used by Ancient Greek orators; it was used by Julius Caesar, and all Roman Emperors. The word itself is formed from propagate, meaning to multiply.

Propaganda was carried much further by the Sacra Congregatio de Propaganda Fide of the Catholic Church. This committee, founded in 1622 by Pope Gregory XV, had action branches in most European countries. These were the local branches of the Inquisition, which sought out heretics. With torture and the threat of death by burning at the stake, they forced heretics to recant (to publicly withdraw their previous beliefs). The objective was to remove all challenges to the supremacy of the Church in matters of belief.

All content from Kiddle encyclopedia articles (including the article images and facts) can be freely used under Attribution-ShareAlike license, unless stated otherwise. Cite this article:
Propaganda Facts for Kids. Kiddle Encyclopedia.