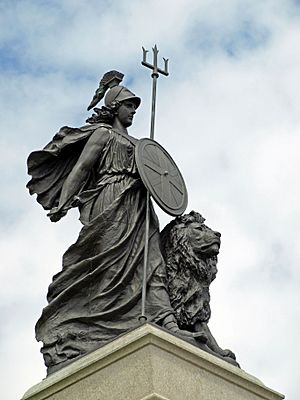 Britannia was the name of Britain in Latin. After the Romans invaded in AD 43, Britannia was used for the Roman province, which was the main part of Great Britain. It included England, and (at times) parts of Scotland and Wales. Previously, in Celtic languages, the island had been known as Albion.

The word Britannia is still used as a general term for Great Britain, and is also the name of the mythical female figure representing the island.

"It was itself named Albion, while all the islands about which we shall soon briefly speak were called the Britanniae".

In his Geographia, Ptolemy, writing in the 2nd Century AD, uses the name "Albion".

In 930, the English King Æthelstan used the title: rex et primicerius totius Albionis regni ("King and chief of the whole realm of Albion"). His nephew King Edgar styled himself Totius Albionis imperator augustus (August emperor of all Albion) in 970.

All content from Kiddle encyclopedia articles (including the article images and facts) can be freely used under Attribution-ShareAlike license, unless stated otherwise. Cite this article:
Britannia Facts for Kids. Kiddle Encyclopedia.