Edgar of England facts for kids 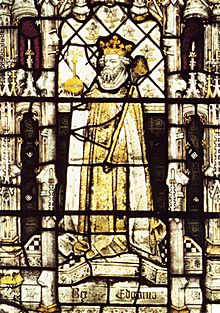 King Edgar or Eadgar I (~942 – 8 July 975) was the younger son of King Edmund I of England. He had the nickname, "the Peaceable", but was a stronger king than his elder brother, Edwy. He took the kingdoms of Northumbria and Mercia from Edwy in 958.

Edgar was recognized as king north of the Thames by Mercian nobles in 958, and officially took the throne when Edwy died in October 959. Immediately Edgar recalled Dunstan from exile and made him successively Bishop of Worcester, then of London and finally Archbishop of Canterbury.

Edgar is regarded as a Saint by the Catholic church. 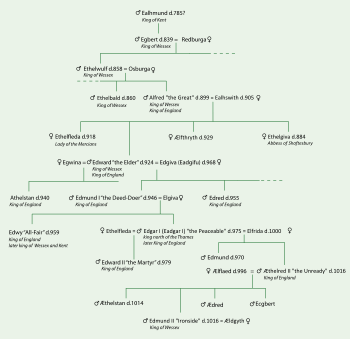 All content from Kiddle encyclopedia articles (including the article images and facts) can be freely used under Attribution-ShareAlike license, unless stated otherwise. Cite this article:
Edgar of England Facts for Kids. Kiddle Encyclopedia.