Edward the Martyr facts for kids

King Edward the Martyr or Eadweard II (c. 962 – March 18 978) followed his father Edgar as King of England in 975, but was murdered after a reign of only three years.

He was declared a holy martyr that means canonised as Saint Edward the Martyr in 1001. That seemed fair as Edward was thought to be a very good Christian who died for his faith and it was thought that the murderers were "irreligious" men.

Motive and details of his murder

Edward's stepmother, Queen Elfrida was against his accession to the throne as she wished her son, Ethelred, to become king instead. However, Edward was supported by more people - including St Dunstan - and was confirmed by the Witan.

King Edward was said to be "a young man of great devotion and excellent conduct. He was completely Orthodox, good and of holy life. Moreover, he loved above all things God and the Church. He was generous to the poor, a haven to the good, a champion of the Faith of Christ, a vessel full of every virtuous grace."

On King Edward's accession to the throne, there was a great famine in the land and violent attacks were stirred up against monasteries by a prominent noblemen who wanted the lands which his father King Edgar had endowed to them. Many of these monasteries were destroyed, and the monks forced to flee. However, the King stood firm together with archbishop Dunstan to defend the Church and the monasteries. For this, some of the nobles decided to remove him and replace him with his younger brother Ethelred.

On March 18 978, the king was hunting with dogs and horsemen near Wareham in Dorset. Then he decided to visit his young brother Ethelred who was being brought up in the house of his mother Elfrida at Corfe Castle, near Wareham. He arrived alone at the castle. When still on his horse Elfrida offered Edward a glass of mead, and when he was drinking it, he was stabbed in the back by one of the queen's party. Ethelred himself was then only ten years old, so was not responsible for the murder. An other tale comes from Henry of Huntingdon who tells that Elfrida herself committed the murder:

"Edward was treasonably slain by his own family... it is reported that his stepmother, that is the mother of King Ethelred, stabbed him with a dagger while she was in the act of offering him a cup to drink." 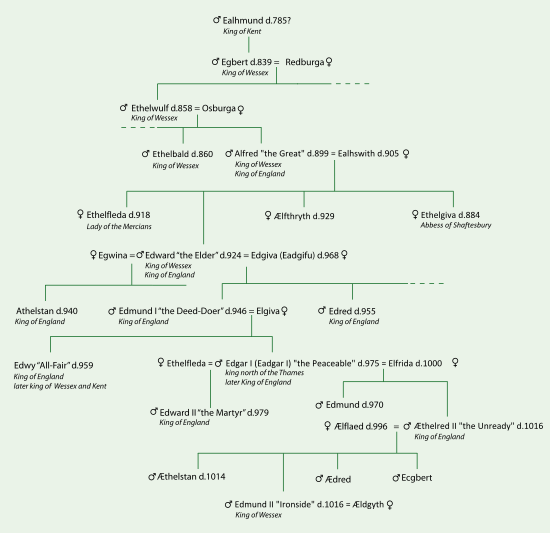 History of his relics

The story of the relics of St Edward began at the moment of his death (martyrdom). Immediately following the murder, the body of the murdered king slipped from the saddle of his horse and was dragged with one foot in the stirrup until it fell into a stream at the base of the hill upon which Corfe Castle stands (From that time people thought that the stream had healing properties - particularly for the blind). The queen then ordered that the body be quickly hidden in a hut nearby. Within the hut however, there lived a woman blind from birth whom the queen supported out of charity. During the night, a wonderful light appeared and filled the whole hut and struck with awe, the woman cried out: "Lord, have mercy!" and suddenly received her sight. At this she discovered the dead body of the king. The church of St. Edward at Corfe Castle now stands on the site of this miracle. At dawn the queen learned of the miracle and was troubled and again ordered the disposal of the body, this time by burying it in a marshy place near Wareham. But a year after the murder a column of fire was seen over the place where the body was hidden, lighting up the whole area. This was seen by some of the inhabitants of Wareham, who raised the body. Immediately a clear spring of healing water sprang up in that place. Accompanied by what was now a huge crowd of mourners, the body was taken to the church of the Most Holy Mother of God in Wareham and buried at the east end of the church. This took place on February 13 980.

Because of a series of following miracles, the relics were brought to the abbey at Shaftesbury. When the relics were taken up from the grave, they were found to be whole and not destroyed. The transport of the relics was done in a great procession on February 13 981 and arrived at Shaftesbury seven days later. There the relics were received by the nuns of Shaftesbury Abbey and were buried with full royal honours on the north side of the altar. On the way from Wareham to Shaftesbury, a further miracle had also taken place; two crippled men were brought close to the bier and those carrying it lowered the body to their level, and the cripples regained full health at once. (This procession and these events were re-enacted 1000 years later in 1981). In 1001, the tomb in which the saint lay was said regularly to rise from the ground. King Ethelred was filled with joy at this and instructed the bishops to raise his brother's tomb from the ground and place it into a more fitting place. As the tomb was opened a wonderful fragrance issued from it - such that all present "thought that they were standing in Paradise". The bishops then took away the sacred relics from the tomb, and placed them in a casket in the holy place of the Saints together with other holy relics. This elevation of the relics of St. Edward took place on June 20 1001.

St. Edward was officially glorified by the All-English Council of 1008, presided over by St. Alphege, archbishop of Canterbury (who was later also martyred by the Danes in 1012). King Ethelred ordered that the saint's three feast days (March 18, February 13, and June 20) should be celebrated throughout England. Shaftesbury Abbey was rededicated to the Mother of God and St. Edward. Shaftesbury was apparently renamed "Edwardstowe", only reverting to its original name after the Reformation. Many miracles were recorded at the tomb of St. Edward, including the healing of lepers and the blind.

During the sixteenth century, under King Henry VIII, monasteries were dissolved and many holy places were demolished, but St. Edward's remains were hidden so as to avoid desecration. In 1931, the relics were recovered by Mr. Wilson-Claridge during an archaeological excavation; their identity was confirmed by Dr. T.E.A. Stowell, an osteologist. In 1970, tests performed on the relics suggested that the young man had been knifed in the back whilst riding his horse and had then been dragged along the ground by the terrified animal with his foot caught in a stirrup. In about 1982, Mr. Wilson-Claridge donated the relics to the Russian Orthodox Church Outside Russia, which placed them in a church in Brookwood Cemetery, in Woking, Surrey. The St. Edward Brotherhood of monks was organized there as well. The church is now named St Edward the Martyr Orthodox Church. Orthodox Christians recognize Edward and other Westerners whose sainthood was declared before the formal split between Orthodox and Catholics in the 11th century.

All content from Kiddle encyclopedia articles (including the article images and facts) can be freely used under Attribution-ShareAlike license, unless stated otherwise. Cite this article:
Edward the Martyr Facts for Kids. Kiddle Encyclopedia.