Church of St. Edward the Martyr, Brookwood facts for kids 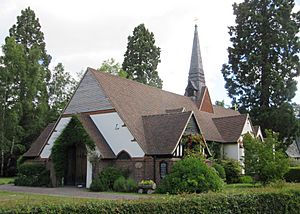 The church from the southwest

The monastic Saint Edward Brotherhood was established at Brookwood Cemetery in 1982 to prepare and care for a new Church in a fitting grade I landscape in which the relics of Saint Edward the Martyr were eventually enshrined in 1988, the King of England who was murdered in 978 and who was succeeded by force by Ethelred the Unready. It has two communities: 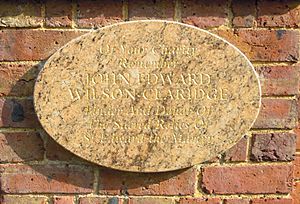 Plaque on the exterior wall to John Edward Wilson-Claridge, who recovered the remains of Edward the Martyr

This is a scholarly branch of Eastern Christianity which maintains it follows original doctrines of Christianity. The Brotherhood and church body look in their lives to the spiritual heritage and example of the Russian Orthodox peoples and the many saints of Britain, particularly those of the formative Kingdom of England who lived in the first ten centuries after the life of Christ.

The church is 600 m south-east of Brookwood railway station via a main path.

The church is 6 miles (10 km) south of Junction 3 of the M3 and is close to the gates of the country's largest cemetery, on the A322 road.

All content from Kiddle encyclopedia articles (including the article images and facts) can be freely used under Attribution-ShareAlike license, unless stated otherwise. Cite this article:
Church of St. Edward the Martyr, Brookwood Facts for Kids. Kiddle Encyclopedia.