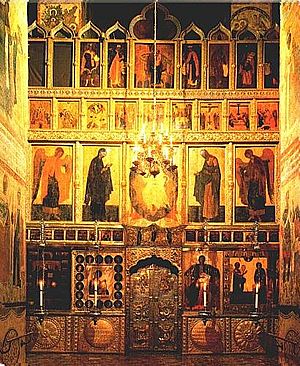 Iconostasis is the name given to a "wall" of icons in Eastern Orthodox Churches. These icons or religious paintings divide the church into a part for the public, and one which is reserved to priests, called the sanctuary.

All content from Kiddle encyclopedia articles (including the article images and facts) can be freely used under Attribution-ShareAlike license, unless stated otherwise. Cite this article:
Iconostasis Facts for Kids. Kiddle Encyclopedia.