The Moscow Kremlin, or simply the Kremlin, is a fortified complex in the center of Moscow, overlooking the Moskva River to the south, Saint Basil's Cathedral and Red Square to the east, and the Alexander Garden to the west.

It is the best known of the kremlins (Russian citadels) and includes five palaces, four cathedrals, and the enclosing Kremlin Wall with Kremlin towers. In addition, within this complex is the Grand Kremlin Palace that was formerly the Tsar's Moscow residence. The complex now serves as the official residence of the President of the Russian Federation and as a museum with 2,783,575 visitors in 2018.

The name "Kremlin" means "fortress inside a city", and is often also used to refer to the government of the Russian Federation in a similar sense to how "White House" refers to the Executive Office of the President of the United States. It previously referred to the government of the Soviet Union (1922–1991) and its highest members (such as general secretaries, premiers, presidents, ministers, and commissars).

The term "Kremlinology" refers to the study of Soviet and Russian politics. 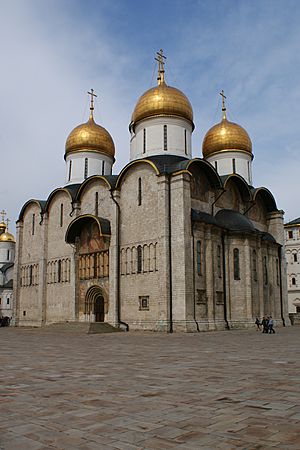 Originally there were eighteen Kremlin towers, but their number increased to twenty in the 17th century. All but three of the towers are square in plan. The highest tower is the Troitskaya, which was built up to its present height of 80 metres (260 ft) in 1495. 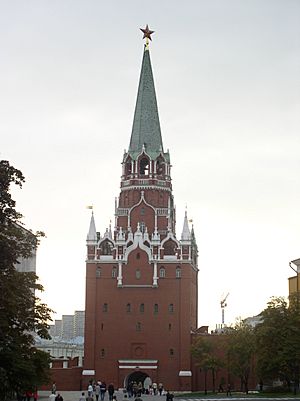 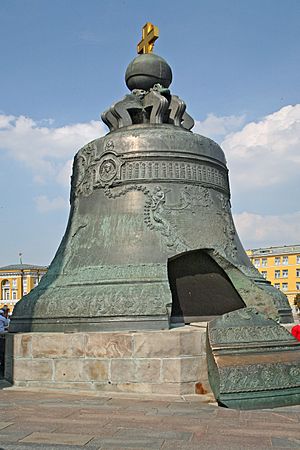 Cathedral Square is the heart of the Kremlin. It is surrounded by six buildings, including three cathedrals. The Cathedral of the Dormition was completed in 1479 to be the main church of Moscow and where all the Tsars were crowned. The gilded, three-domed Cathedral of the Annunciation was completed next in 1489, only to be reconstructed to a nine-domed design a century later. On the south-east of the square is the much larger Cathedral of the Archangel Michael (1508), where almost all the Muscovite monarchs from Ivan Kalita to Ivan V of Russia are laid at rest.

There are two domestic churches of the Metropolitans and Patriarchs of Moscow, the Church of the Twelve Apostles (1653–1656) and the exquisite one-domed Church of the Deposition of the Virgin's Robe, built by Pskov artisans from 1484–1488 and featuring superb icons and frescoes from 1627 and 1644.

The other notable structure is the Ivan the Great Bell Tower on the north-east corner of the square, which is said to mark the exact centre of Moscow and resemble a burning candle. Completed in 1600, it is 81 metres (266 feet) high. Until the Russian Revolution, it was the tallest structure in the city, as construction of buildings taller than that was forbidden. Its 21 bells would sound the alarm if any enemy was approaching. The upper part of the structure was destroyed by the French during the Napoleonic Invasion and has been rebuilt. The Tsar bell, the largest bell in the world, stands on a pedestal next to the tower.

The oldest non religious structure still standing is Ivan III's Palace of Facets (1491), which holds the imperial thrones. The next oldest is the first home of the royal family, the Terem Palace. The largest structure in the Kremlin, it cost a sum of eleven million rubles to build and more than one billion dollars to renovate in the 1990s. It contains dazzling reception halls, a ceremonial red staircase, private apartments of the tsars, and the lower storey of the Resurrection of Lazarus church (1393), which is the oldest standing structure in the Kremlin and the whole of Moscow.

The northern corner of the Kremlin is occupied by the Arsenal, which was originally built for Peter the Great in 1701. The southwestern section of the Kremlin holds the Armoury building. Built in 1851 to a Renaissance Revival design, it is currently a museum housing Russian state Regalia and Diamond Fund. 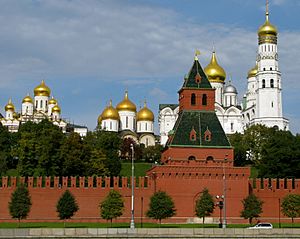 In order to stop the disruptions to Moscow traffic caused by motorcades, President Vladimir Putin authorized the construction of the Kremlin helipad. The helipad was completed in May 2013. The President will now commute back and forth to the Kremlin using a Mil Mi-8 helicopter. Careful consideration was taken in choosing the location of the helipad; the location chosen is said to be of no threat to the architecture of the Kremlin.

All content from Kiddle encyclopedia articles (including the article images and facts) can be freely used under Attribution-ShareAlike license, unless stated otherwise. Cite this article:
Moscow Kremlin Facts for Kids. Kiddle Encyclopedia.