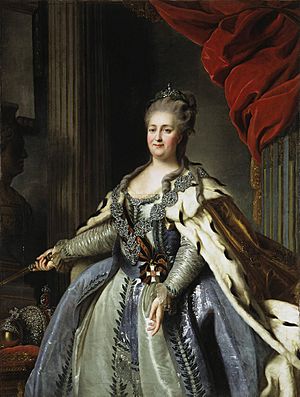 Catherine II of Russia (Also titled Catherine the Great or Yekaterina Aleksei'evna) (April 21, 1729, Stettin, Germany – November 17, 1796 Tsarskoye Selo, Russia) was Empress of Russia. She came to power by a Coup d'état that deposed her husband, who was killed.

Catherine greatly increased the power of the crown. In wars against the Ottoman Empire and Polish-Lithuanian Commonwealth she conquered much land in the west and south. During Catherine's rule, Russia became a strong power in Europe.

Catherine was born in Stettin, which was a part of the Kingdom of Prussia at the time. She was the daughter of Prince Christian August of Anhalt-Zerbst and Princess Johanna Elizabeth of Holstein-Gottorp. She had five brothers and sisters. She married Peter III (who, like Catherine, was German) at age fifteen, and became empress of Russia at age 32. She was educated in three languages (Russian, German and French). She grew up as a Lutheran (Protestant). When she married Peter, she changed to the Russian Orthodox church.

Catherine's marriage was said to be unfaithful and distraught. Peter and Catherine were each said to have several lovers. After they had been married nine years, Catherine bore a son, Paul. Paul was born on 1 October [O.S. 20 September] 1754. Both parents accepted him as legitimate, even though there had been rumors about Catherine having been unfaithful. Catherine also had a daughter Anna, born in 1757. Anna died in 1759. Catherine and Peter had a very difficult relationship. When Peter died, Catherine was left to rule Russia on her own. Catherine had many lovers, probably because of the difficult marriage. Over twenty lovers are known. A few of these seem to be more important:

Six months after Peter took the throne, Catherine led a palace coup to overthrow him. The question of who killed him and why is still much discussed. Catherine was greatly admired by the public. She was much involved in foreign affairs, including successful Russo-Turkish Wars which conquered new territories for Russia.

Catherine suffered a stroke on 16 November [O.S. 5 November] 1796. Due to the stroke, she lost consciousness. She died in her bed at 9:20 the following evening, while she was still unconscious. Catherine was buried at the Peter and Paul Cathedral in Saint Petersburg.

All content from Kiddle encyclopedia articles (including the article images and facts) can be freely used under Attribution-ShareAlike license, unless stated otherwise. Cite this article:
Catherine II of Russia Facts for Kids. Kiddle Encyclopedia.