Ivan the Terrible facts for kids

Ivan was the crown prince of Vasili III, the Rurikid ruler of the Grand Duchy of Moscow, and was appointed Grand Prince at three years-old after his father's death. Ivan was proclaimed Tsar (Emperor) of All Rus' in 1547 at the age of seventeen, establishing the Tsardom of Russia with Moscow as the predominant state.

Ivan's reign was characterized by Russia's transformation from a medieval state into an empire under the Tsar, though at immense cost to its people and its broader, long-term economy. Ivan conquered the Khanates of Kazan, Astrakhan and Sibir, with Russia becoming a multiethnic and multicontinental state spanning approximately 4,050,000 km2 (1,560,000 sq mi), developing a bureaucracy to administer the new territories. Ivan triggered the Livonian War, which ravaged Russia and resulted in the loss of Livonia and Ingria, but allowed him to exercise greater autocratic control over Russia's nobility, which he violently purged in the Oprichnina.

Ivan was an able diplomat, a patron of arts and trade, and the founder of Russia's first publishing house, the Moscow Print Yard. Ivan was popular among Russia's commoners (see Ivan the Terrible in Russian folklore) except for the people of Novgorod and surrounding areas who were subject to the Massacre of Novgorod.

Historic sources present disparate accounts of Ivan's complex personality: he was described as intelligent and devout, but also prone to paranoia, rages, and episodic outbreaks of mental instability that increased with age. Ivan is popularly believed to have killed his eldest son and heir Ivan Ivanovich and the latter's unborn son during his outbursts, which left the politically ineffectual Feodor Ivanovich to inherit the throne, whose rule directly led to the end of the Rurikid dynasty and the beginning of the Time of Troubles. 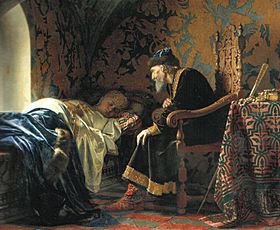 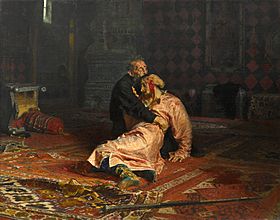 Ivan the Terrible killing his son; painting by Ilya Repin 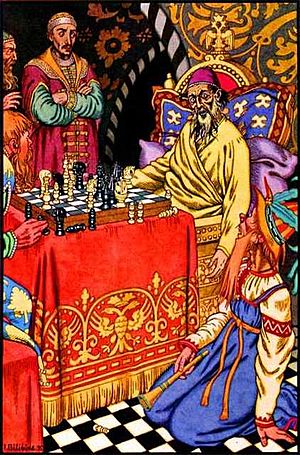 Death of Ivan the Terrible by Ivan Bilibin (1935)

Ivan was a devoted follower of Christian Orthodoxy and placed the most emphasis on defending the divine right of the ruler to unlimited power under God. Some scholars explain the sadistic and brutal deeds of Ivan the Terrible with the religious concepts of the 16th century, which included drowning and roasting people alive or torturing victims with boiling or freezing water, corresponding to the torments of Hell, consistent with Ivan's view of being God's representative on Earth with a sacred right and duty to punish. He may also have been inspired by the model of Archangel Michael with the idea of divine punishment.

Ivan died from a stroke while playing chess with Bogdan Belsky on 28 March [O.S. 18 March] 1584. Upon Ivan's death, the Russian throne was left to his unfit middle son Feodor. Feodor died childless in 1598, ushering in the Time of Troubles.

Little is known about Ivan's appearance, as virtually all existing portraits were made after his death and contain uncertain amounts of artist's impression. In 1567, ambassador Daniel Prinz von Buchau described Ivan as follows: "He is tall, stout and full of energy. His eyes are big, observing and restless. His beard is reddish-black, long and thick, but most other hairs on his head are shaved off according to the Russian habits of the time".

According to Ivan Katyryov-Rostovsky, the son-in-law of Michael I of Russia, Ivan had an unpleasant face, with a long and crooked nose. He was tall and athletically built, with broad shoulders and narrow waist.

In 1963, the graves of Ivan and his sons were excavated and examined by Soviet scientists. Chemical and structural analysis of his remains disproved earlier suggestions that Ivan suffered from syphilis, or that he was poisoned by arsenic. At the time of his death he was 178 cm tall and weighed 85–90 kg. His body was rather asymmetrical and had a large amount of osteophytes uncharacteristic of his age; it also contained excessive concentration of mercury. Researchers concluded that while Ivan was athletically built in his youth, in his last years he had developed various bone diseases and could barely move. They attributed the high mercury content in his body to the use of ointments for joints healing. 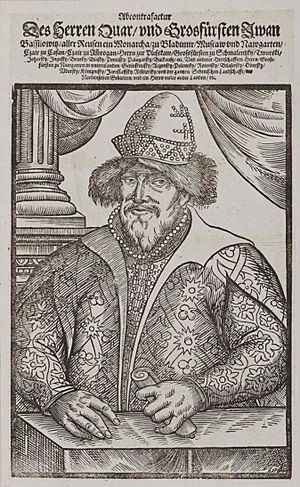 Ivan completely altered Russia's governmental structure, establishing the character of modern Russian political organisation. Ivan's creation of the Oprichnina, answerable only to him, not only afforded him personal protection but curtailed the traditional powers and rights of the boyars. Henceforth, Tsarist autocracy and despotism would lie at the heart of the Russian state. Ivan bypassed the Mestnichestvo system and offered positions of power to his supporters among the minor gentry. The Empire's local administration combined both locally and centrally appointed officials; the system proved durable and practical, and sufficiently flexible to tolerate later modification.

Ivan's expedition against Poland failed at a military level, but it helped extend Russia's trade, political and cultural links with Europe; Peter the Great built on these connections in his bid to make Russia a major European power. At Ivan's death, the empire encompassed the Caspian to the southwest, and Western Siberia to the east. Southwards, his conquests ignited several conflicts with expansionist Turkey, whose territories were thus confined to the Balkans and the Black Sea regions.

Ivan's management of Russia's economy proved disastrous, both in his lifetime and after. He had inherited a government in debt, and in an effort to raise more revenue for his expansionist wars, he instituted a series of increasingly unpopular and burdensome taxes. Successive wars drained Russia of manpower and resources, bringing it "to the brink of ruin". After Ivan's death, his empire's nearly ruined economy contributed to the decline of his own Rurik Dynasty, leading to the "Time of Troubles".

Ivan's notorious outbursts and autocratic whims helped characterise the position of Tsar as one accountable to no earthly authority, only to God. Tsarist absolutism faced few serious challenges until the late 19th century. Ivan's legacy was manipulated by Communist Russia as a potential focus for nationalist pride; his image became closely associated with the personality cult of Joseph Stalin. While early Soviet, Marxist–Leninist historiography "attached greater significance to socio-economic forces than to political history and the role of individuals", Stalin wanted official historians to make Russia's history "comprehensible and accessible" to the populace, with an emphasis on those "great men", such as Ivan, Alexander Nevsky and Peter the Great, who had strengthened and expanded the Russian state. In modern, post-Soviet Russia, a campaign has been run to seek the granting of sainthood to Ivan IV; the Russian Orthodox Church opposed the idea.

All content from Kiddle encyclopedia articles (including the article images and facts) can be freely used under Attribution-ShareAlike license, unless stated otherwise. Cite this article:
Ivan the Terrible Facts for Kids. Kiddle Encyclopedia.