Night at the Museum: Battle of the Smithsonian facts for kids

A third installment, titled Night at the Museum: Secret of the Tomb, is scheduled to be released in theaters on December 19, 2014. Director Shawn Levy is returning as well as Ben Stiller reprising his role as Larry Daley. 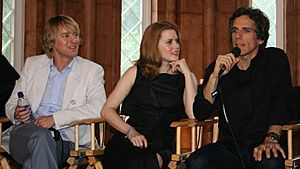 Owen Wilson, Amy Adams and Ben Stiller at a panel for the film in May 2009.

All content from Kiddle encyclopedia articles (including the article images and facts) can be freely used under Attribution-ShareAlike license, unless stated otherwise. Cite this article:
Night at the Museum: Battle of the Smithsonian Facts for Kids. Kiddle Encyclopedia.