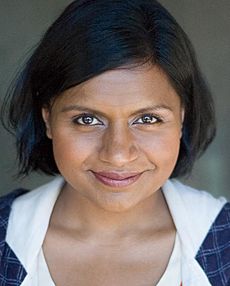 Vera Mindy Chokalingam, known professionally as Mindy Kaling (born June 24 1979 in Cambridge, Massachusetts) is an American actress and comedian. She is also a writer and acts mostly on television programs.

Kaling was born in Cambridge, Massachusetts to Indian Hindu parents. Her mother was a doctor while her father was an architect. She was named "Mindy" after the character in the television series Mork & Mindy. She describes herself as a child calling herself "a respectful and hardworking wallflower". She took up acting when she attended Dartmouth College. She took a break from college for a semester to intern with Late Night with Conan O'Brien. Kaling was a member of Dartmouth's improv troupe "The Dog Day Players". She also created "Badly Drawn Girl". a comic strip for the Dartmouth newspaper. In the play "+Matt & Ben" she played Ben Affleck. It was featured on Time Magazine"s 2003 "Top Ten Theatrical Events of the Year". She graduated in 2001.

In 2005 Kaling began playing the airhead Kelly Kapoor in the situation comedy The Office. Kaling was also a writer and producer for the show. She plays the protagonist in The Mindy Project. She is a feminist. In 2005 Kaling acted in a film for the first time. She played a character called Amy in The 40 Year Old Virgin.

In 2014 Kaling was on one of the four February covers of ELLE Magazine. It started a controversy because she was the only one of the four that was not a full-body shot. The question became "Mindy's not skinny enough to show her whole body, standing up from head to toe?" Kaling said she liked the cover and it made her feel glamorous.

She will appear as Mrs. Who in the 2018 Disney movie A Wrinkle in Time.

All content from Kiddle encyclopedia articles (including the article images and facts) can be freely used under Attribution-ShareAlike license, unless stated otherwise. Cite this article:
Mindy Kaling Facts for Kids. Kiddle Encyclopedia.