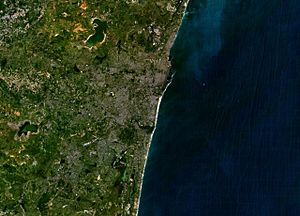 Chennai as seen from space

Chennai (formerly known as Madras) is the capital city of the Indian state of Tamil Nadu. It has a population of about 7 million people. Almost 10% of all of the people in the state live in Chennai. The city is the fourth largest city of India. It was founded in 1661 by the British East India Company. The city is on the Coromandel Coast of the Bay of Bengal. Chennai is the automobile capital of India. It is also referred as the Detroit of South Asia. The 12 km (7 mi) long Marina Beach in Chennai, is one of the longest beaches in the world. The city is separated into three parts by two rivers. The Cooum River divides the city into almost half and the Adyar River divides the southern half of the city into two parts. The historic Buckingham Canal runs through the city. It is almost parallel to the coast. The 350 year old city still has much of its old charm. Today, it is a big commercial and industrial centre. The city has much cultural heritage. The temples, shrines, forts and palaces of the city combine its past with the present.

Chennai and its nearby area has been an important administrative, military and economic centre back to the 1st century. Many South India kingdoms like the Pallava, the Chola, the Pandya and Vijayanagara Empires have ruled over the area. The British controlled the town in 1749. Under British control, the city grew into a major urban centre and naval base. The city grew up around the English settlement of Fort Saint George. It slowly grew in the nearby towns and villages. Chennai became the capital of Madras state (renamed as Tamil Nadu in 1968) when India became independent in 1947.

Chennai is connected by airways, railways and roads with all the major towns of the country.

Chennai is linked with roads from rest of the country. The distance of major cities and towns from Chennai are:

Chennai railway station is connected with all the major railway stations of the country. These include Delhi, Mumbai, Calcutta, Ahmedabad, Bangalore, Cochin, Hyderabad, Lucknow, and Varanasi.

It is one of the busiest airports in Asia.

All content from Kiddle encyclopedia articles (including the article images and facts) can be freely used under Attribution-ShareAlike license, unless stated otherwise. Cite this article:
Chennai Facts for Kids. Kiddle Encyclopedia.