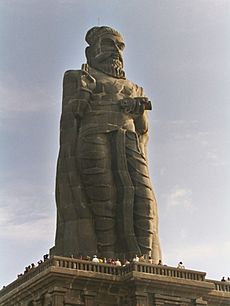 Thiruvalluvar (திருவள்ளுவர் in Tamil), was a Tamil poet and philosopher who wrote the classic of couplets of Tamil, Thirukkural.

All content from Kiddle encyclopedia articles (including the article images and facts) can be freely used under Attribution-ShareAlike license, unless stated otherwise. Cite this article:
Thiruvalluvar Facts for Kids. Kiddle Encyclopedia.