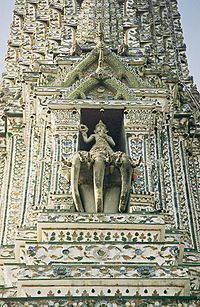 Indra (Devanagari: इन्द्र) or Śakra is the most important among the Indo-Aryan gods. He is the God of war, the god of thunderstorms. In the Vedas, many verses (hymns) are there in his praise. The Rigveda praises him as a very strong God. Many Hindu scriptures tell about Indra, his character and his deeds.

Indra resides in a mythical city located above in the sky. The city’s name is Amravati. He lives there with his wife named Indrani, and several other smaller gods. There are many apsaras in amravati.

Indra was a very important God during the Vedic period. Later his importance became less. Gods like Brahma, Vishnu, and Shiva became more important in Hinduism.

Again, his weapon is Vajra which is represented by Thunderbolt! His means, at times, treacherous and he is shown as, at times, jealous and vengeful. Further, he is made to suffer his own bad deeds.

All content from Kiddle encyclopedia articles (including the article images and facts) can be freely used under Attribution-ShareAlike license, unless stated otherwise. Cite this article:
Indra Facts for Kids. Kiddle Encyclopedia.