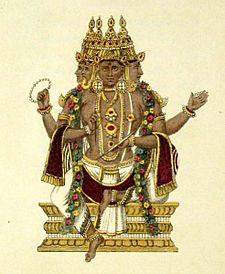 According to Hinduism and Hindu mythology, Brahma is one of the three major gods of Hindus. Brahma is said to be the creator of the whole universe. The other two gods are Vishnu, the preserver, and Shiva, the destroyer, all three of which make up the Trimurti.

Hindu tradition states that Brahma originally had five heads. However, the mythological story tells that Shiva ordered Bherav to cut one of the heads of Brahma because Brahma lied, saying that he had found the finite source of the actually infinite Linga of light that was Shiva's manifestation. He had not found it, but had come only to the highest heaven and not to the Transcendent, Shiva. The tradition also states that the remaining four heads of Brahma represent many aspects of Hinduism. The four heads represent four Vedas, which are very important Hindu scriptures. It is said that the four heads of Brahma are eternally reciting the four Vedas in penance for having lied. These four heads also represent four divisions of time of Hinduism, the Yugas. They also represent four divisions of the Hindu society, the four Varnas.

All content from Kiddle encyclopedia articles (including the article images and facts) can be freely used under Attribution-ShareAlike license, unless stated otherwise. Cite this article:
Brahma Facts for Kids. Kiddle Encyclopedia.