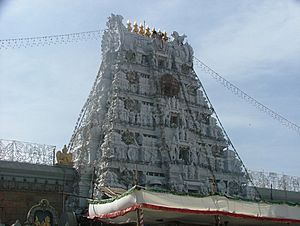 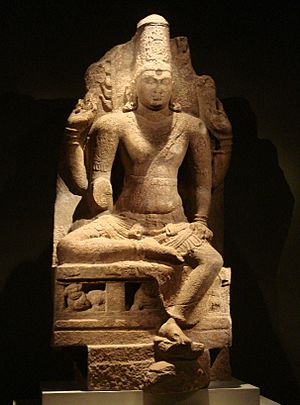 This is a statuette of four-armed Vishnu, form the 8th or 9th century CE

Vaishnavism (Sanskrit: वैष्णव धर्म) is a tradition of Hinduism. Its followers worship Vishnu or its avatars, mainly Rama and Krishna as the highest, or original God. This worship in different perspectives or historical traditions addresses God under the names of Narayana, Krishna, Vāsudeva or more often "Vishnu", and their associated avatars. Its beliefs and practices, especially the concepts of Bhakti and Bhakti Yoga, are based largely on the Upanishads, and associated with the Vedas and Puranic texts such as the Bhagavad Gita, and the Padma, Vishnu and Bhagavata Puranas.

The followers of Vaishnavism are referred to as Vaishnava(s) or Vaishnavites. A large percentage of Hindus are Vaishnavas, with the vast majority living in India. Awareness, recognition, and growth of the belief has significantly increased outside of India in recent years. The Gaudiya Vaishnava branch of the tradition has significantly increased the awareness of Vaishnavism internationally, since the mid-1900s, largely through the activities and geographical expansion of the Hare Krishna movement, primarily through ISKCON and more recently, through several other Vaishnava organizations conducting preaching activities in the West.

All content from Kiddle encyclopedia articles (including the article images and facts) can be freely used under Attribution-ShareAlike license, unless stated otherwise. Cite this article:
Vaishnavism Facts for Kids. Kiddle Encyclopedia.