Krishna is a major deity in Hinduism. He is worshipped as the eighth avatar of the god Vishnu and also as the supreme God in his own right. He is the god of compassion, tenderness, and love in Hinduism, and is one of the most popular and widely worshipped among Indian divinities.

Krishna's birthday is celebrated every year by Hindus on Krishna Janmashtami according to the Hindu calendar, which falls in late August or early September of the Gregorian calendar. Krishna is usually depicted with a flute in his hand.

The stories of Krishna's life are generally titled as Krishna Leela. He is a central character and is mentioned in many Hindu philosophical, theological, and mythological texts. They portray him in various perspectives: a god-child, a prankster, a divine hero, and as the universal supreme being. The arts depicting him reflect these legends, and show him in different stages of his life, such as an infant eating butter, a young boy playing a flute, a young boy with Radha, or a friendly charioteer giving counsel to Arjuna. 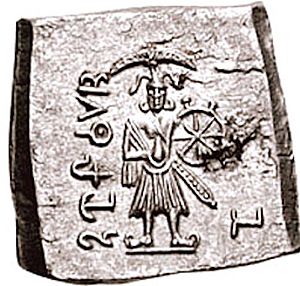 Krishna as Vasudeva on a coin of Agathocles of Bactria, circa 180 BCE

The name "Krishna" originates from the Sanskrit word Kṛṣṇa, which is primarily an adjective meaning "black", "dark", or "dark blue". The waning moon is called Krishna Paksha, relating to the adjective meaning "darkening". The name is also interpreted sometimes as "all-attractive". Based on his name, Krishna is often depicted in idols as black- or blue-skinned.

Krishna is often depicted wearing a peacock-feather wreath or crown, and playing the bansuri (Indian flute). In this form, he is usually shown standing with one leg bent in front of the other in the Tribhanga posture. He is sometimes accompanied by cows or a calf, which symbolise the divine herdsman Govinda.

Most scholars of Hinduism and Indian history accept that Krishna was a real male person, whether human or divine, who lived on Indian soil by at least 1000 BCE and interacted with many other historical persons.

All content from Kiddle encyclopedia articles (including the article images and facts) can be freely used under Attribution-ShareAlike license, unless stated otherwise. Cite this article:
Krishna Facts for Kids. Kiddle Encyclopedia.