Vishnu is one of the three main gods in Hinduism. Vaishnavas believe that Vishnu is the highest God. Vishnu is the preserver god, which means he protects the earth from being destroyed and keeps it going, according to this religion, and he has come to earth in nine forms (called avatars) so far, with one yet to come. His most famous forms are Rama and Krishna. Vishnu's wife is Lakshmi, the Hindu goddess of fortune.

Vishnu is usually shown with light blue skin and four arms. He holds a lotus, mace (gada), conch (shankha) and disc (chakra) in each of four hands.

There are ten avatars of Vishnu (in the order they appeared): 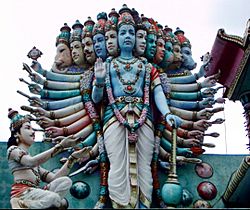 All content from Kiddle encyclopedia articles (including the article images and facts) can be freely used under Attribution-ShareAlike license, unless stated otherwise. Cite this article:
Vishnu Facts for Kids. Kiddle Encyclopedia.