Jaipur is the capital and the largest city of the Indian state of Rajasthan in Northern India. It was founded on 18 November 1727 by Jai Singh II, the ruler of Amer after whom the city is named. As of 2011, the city has a population of 3.1 million, making it the tenth most populous city in the country. Jaipur is also known as the Pink City of India.

It is located 280 km (174 miles) from the Indian capital New Delhi. Jaipur is a popular tourist destination in India and forms a part of the west Golden Triangle tourist circuit along with Delhi and Agra (240 km, 149 mi). It also serves as a gateway to other tourist destinations in Rajasthan. Jaipur is home to two UNESCO World Heritage Sites: the Jantar Mantar and the Amer Fort. 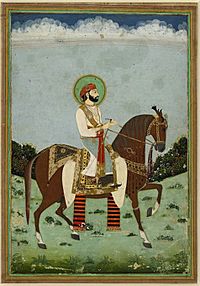 The city of Jaipur was founded in 1727 by Jai Singh II, the Raja of Amer who ruled from 1699 to 1743. He planned to shift his capital from Amer to Jaipur to accommodate the growing population and increasing scarcity of water. Jai Singh consulted several books on architecture and architects while planning the layout. The construction of the city began in 1726 and took four years to complete the major roads, offices and palaces. The city was divided into nine blocks, two of which contained the state buildings and palaces, with the remaining seven allotted to the public. Huge protective barriers were built, pierced by seven fortified gates.

During the rule of Sawai Ram Singh I, the city was painted pink to welcome the Prince of Wales, later Edward VII, in 1876. Many of the avenues remained painted in pink, giving Jaipur a distinctive appearance and the epithet Pink city. In the 19th century, the city grew rapidly and by 1900 it had a population of 160,000. The wide boulevards were paved and its chief industries were the working of metals and marble, fostered by a school of art founded in 1868. 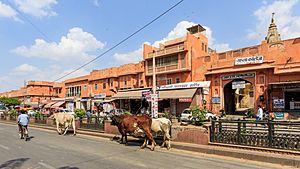 Jaipur has many cultural sites like Jawahar Kala Kendra formed by Architect Charles Correa and Ravindra Manch. Government Central Museum hosts several arts and antiquities. There is a government museum at Hawa Mahal and an art gallery at Viratnagar. There are statues depicting Rajasthani culture around the city. The prior rulers of Jaipur patronised a number of arts and crafts. They invited skilled artisans, artists and craftsmen from India and abroad who settled in the city. With a wonderful combination of ancient royal heritage and ultra-modern life method Jaipur displays a cool presentation of urban lifestyle. 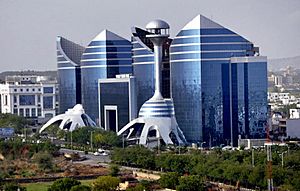 In addition to its role as the provincial capital, educational, and administrative centre, the economy of Jaipur is fuelled by tourism, gemstone cutting, the manufacture of jewellery and luxury textiles, and information technology. Three major trade promotion organisations have their offices in Jaipur. In 2008, Jaipur was ranked 31 among the 50 Emerging Global Outsourcing cities. Jaipur is a major hub for arts and crafts. It has many traditional shops selling antiques, jewellery, handicrafts, gems, bangles, pottery, carpets, textiles, leather and metal products. Jaipur is one of India's largest manufacturers of hand-knotted rugs.

Jaipur is a major tourist destination in India, Jaipur was ranked the 7th best place to visit in Asia. According to TripAdvisor's 2015 Traveller's Choice Awards for Destination, Jaipur ranked 1st among the Indian destinations for the year. The Presidential Suite at the Raj Palace Hotel, billed at US$45,000 per night, was listed in second place on CNN's World's 15 most expensive hotel suites in 2012.

There are many sights to be seen in Jaipur, the Jantar Mantar observatory and Amer Fort are one of the World Heritage Sites. Hawa Mahal is a five-storey pyramidal shaped monument with 953 windows that rises 15 metres (50 ft) from its high base. Sisodiya Rani Bagh and Kanak Vrindavan are the major parks in Jaipur.

All content from Kiddle encyclopedia articles (including the article images and facts) can be freely used under Attribution-ShareAlike license, unless stated otherwise. Cite this article:
Jaipur Facts for Kids. Kiddle Encyclopedia.