A metropolis is a word that means a very big city, that usually has over 500,000 people living in it. A metropolis often has many smaller towns and cities inside its area. The word is very old and began in Greece.

In a broader sense, it refers to the city or state of origin of a colony (as of ancient Greece), a city regarded as a center of a specified activity, or a large important city. 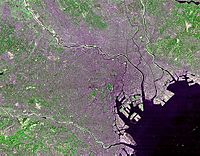 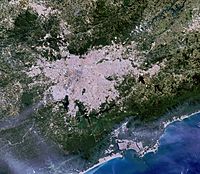 São Paulo, the largest metropolis of the Southern Hemisphere

The Colosseum at night 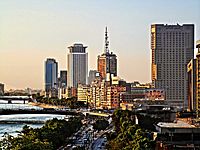 Dhaka is the largest city in Bangladesh

Jakarta, the largest and busiest city in Indonesia

Karachi is Pakistan's largest city with about 23.5 million population

Metro Manila, the most populous metropolitan area in the Philippines 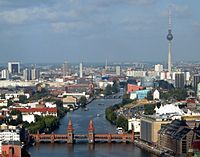 London is the largest city in the UK

New York City is the largest city in the U.S.

Skyline of Tokyo, with Mount Fuji in the background

All content from Kiddle encyclopedia articles (including the article images and facts) can be freely used under Attribution-ShareAlike license, unless stated otherwise. Cite this article:
Metropolis Facts for Kids. Kiddle Encyclopedia.