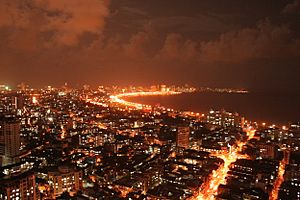 Mumbai (previously known as Bombay until 1996) is a natural harbor on the west coast of India, and is the capital city of Maharashtra state. It is India's largest city, and one of the world's most populous cities. It is the financial capital of India. The city is the second most-populous in the world. It has approximately 14 million people. Along with the neighboring cities of Navi Mumbai and Thane, it forms the world's 4th largest urban agglomeration. They have around 19 million people. 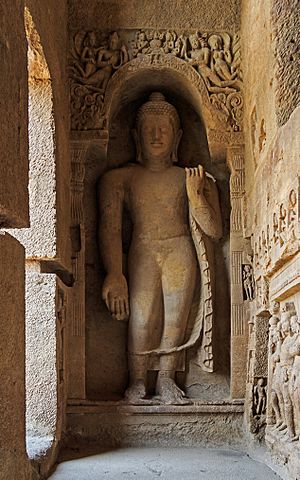 The seven islands that form Bombay were home to fishing colonies. The islands were ruled by successive kingdoms and indigenous empires before Portuguese settlers took it. Then, it went to the British East India Company. During the mid-18th century, Bombay became a major trading town. It became a strongplace for the Indian independence movement during the early 20th century. When India became independent in 1947, the city was incorporated into Bombay State. In 1960, following the Samyukta Maharashtra movement, a new state of Maharashtra was created with Bombay as the capital. It was renamed Mumbai in 1996. 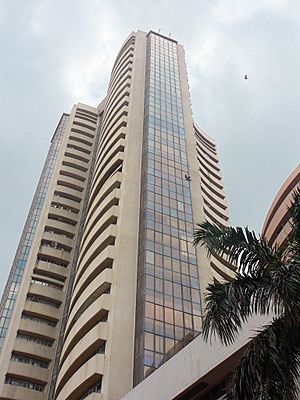 The Bombay Stock Exchange is the oldest stock exchange in Asia.

Mumbai generates 5% of India's GDP. It accounts for 25% of industrial output, 40% of sea trade, and 70% of capital transactions to India's economy. The Reserve Bank of India, the Bombay Stock Exchange, the National Stock Exchange of India and the many Indian companies and multinational corporations are in the city. It also has the Hindi film and television industry, known as Bollywood. 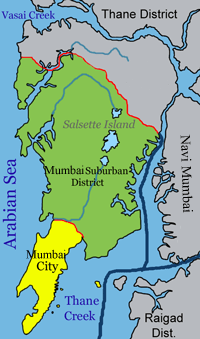 The Mumbai Metropolitan Region which includes portions of Thane, Palghar and Raigad districts in addition to Greater Mumbai, covers an area of 4,355 km2 (1681.5 sq mi).

Mumbai lies at the mouth of the Ulhas River on the western coast of India, in the coastal region known as the Konkan. It sits on Salsette Island (Sashti Island), which it partially shares with the Thane district.

Mumbai is bounded by the Arabian Sea to the west.

Apart from the Bhatsa Dam, there are six major lakes that supply water to the city: Vihar, Lower Vaitarna, Upper Vaitarna, Tulsi, Tansa and Powai. Tulsi Lake and Vihar Lake are located in Borivili National Park, within the city's limits. The supply from Powai lake, also within the city limits, is used only for agricultural and industrial purposes.

Three small rivers, the Dahisar River, Poinsar (or Poisar) and Ohiwara (or Oshiwara) originate within the park, while the polluted Mithi River originates from Tulsi Lake and gathers water overflowing from Vihar and Powai Lakes.

The coastline of the city is indented with numerous creeks and bays, stretching from the Thane creek on the eastern to Madh Marve on the western front. The eastern coast of Salsette Island is covered with large mangrove swamps, rich in biodiversity, while the western coast is mostly sandy and rocky.

Mumbai has a tropical climate, specifically a tropical wet and dry climate (Aw) under the Köppen climate classification, with seven months of dryness and peak of rains in July. The cooler season from December to February is followed by the summer season from March to June. The period from June to about the end of September constitutes the south-west monsoon season, and October and November form the post-monsoon season.

Air pollution is a major issue in Mumbai. 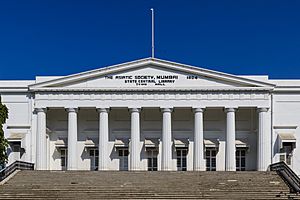 Asiatic Society of Bombay is one of the oldest public libraries in the city.

Mumbai's culture is a blend of traditional festivals, food, music, and theatres. The city offers a cosmopolitan and diverse lifestyle with a variety of food, entertainment, and night life, available in a form and abundance comparable to that in other world capitals. Mumbai's history as a major trading centre has led to a diverse range of cultures, religions, and cuisines coexisting in the city. This unique blend of cultures is due to the migration of people from all over India since the British period.

Mumbai is the birthplace of Indian cinema—Dadasaheb Phalke laid the foundations with silent movies followed by Marathi talkies—and the oldest film broadcast took place in the early 20th century. Mumbai also has a large number of cinema halls that feature Bollywood, Marathi and Hollywood movies. 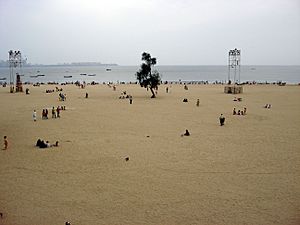 Girgaum Chowpatty beach. Beaches are a popular tourist attraction in the city.

Mumbai residents celebrate both Western and Indian festivals. Diwali, Holi, Eid, Christmas, Navratri, Good Friday, Dussera, Moharram, Ganesh Chaturthi, Durga Puja and Maha Shivratri are some of the popular festivals in the city. The Kala Ghoda Arts Festival is an exhibition of a world of arts that encapsulates works of artists in the fields of music, dance, theatre, and films. A week-long annual fair known as Bandra Fair, starting on the following Sunday after 8 September, is celebrated by people of all faiths, to commemorate the Nativity of Mary, mother of Jesus, on 8 September.

The Banganga Festival is a two-day music festival, held annually in the month of January, which is organised by the Maharashtra Tourism Development Corporation (MTDC) at the historic Banganga Tank in Mumbai. The Elephanta Festival—celebrated every February on the Elephanta Islands—is dedicated to classical Indian dance and music and attracts performers from across the country. Public holidays specific to the city and the state include Maharashtra Day on 1 May, to celebrate the formation of Maharashtra state on 1 May 1960, and Gudi Padwa which is the New Year's Day for Marathi people.

Beaches are a major tourist attraction in the city. The major beaches in Mumbai are Girgaum Chowpatty, Juhu Beach, Dadar Chowpatty, Gorai Beach, Marve Beach, Versova Beach, Madh Beach, Aksa Beach, and Manori Beach. Most of the beaches are unfit for swimming, except Girgaum Chowpatty and Juhu Beach. Essel World is a theme park and amusement centre situated close to Gorai Beach, and includes Asia's largest theme water park, Water Kingdom. Adlabs Imagica opened in April 2013 is located near the city of Khopoli off the Mumbai-Pune Expressway.

The Mumbai Suburban Railway system carries more than 6.99 million commuters on a daily basis. It has the highest passenger density of any urban railway system in the world. 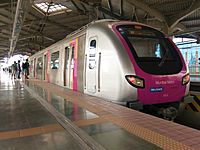 The Mumbai Monorail opened in February 2014.

The black and yellow Premier Padmini Taxis are iconic of Mumbai. 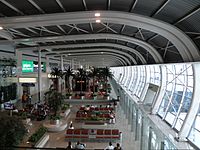 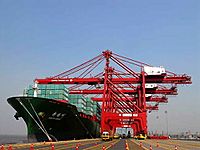 Jawaharlal Nehru Port Trust is the busiest port in India

The Mumbai Suburban Railway, popularly referred to as Locals forms the backbone of the city's transport system. It is operated by the Central Railway and Western Railway zones of the Indian Railways. Mumbai's suburban rail systems carried a total of 6.3 million passengers every day in 2007. Trains are overcrowded during peak hours, with nine-car trains of rated capacity 1,700 passengers, actually carrying around 4,500 passengers at peak hours. The Mumbai rail network is spread at an expanse of 319 route kilometres. 191 rakes (train-sets) of 9 car and 12 car composition are utilised to run a total of 2,226 train services in the city.

Mumbai's bus services carried over 5.5 million passengers per day in 2008.

Buses are generally favoured for commuting short to medium distances, while train fares are more economical for longer distance commutes.

The Mumbai Darshan is a tourist bus service which explores numerous tourist attractions in Mumbai.

Water transport in Mumbai consists of ferries, hovercrafts and catamarans.

Mumbai is served by two major ports, Mumbai Port Trust and Jawaharlal Nehru Port Trust, which lies just across the creek in Navi Mumbai. Mumbai Port has one of the best natural harbours in the world, and has extensive wet and dry dock accommodation facilities. Ferries from Ferry Wharf in Mazagaon allow access to islands near the city.

The city is also the headquarters of the Western Naval Command, and also an important base for the Indian Navy.

All content from Kiddle encyclopedia articles (including the article images and facts) can be freely used under Attribution-ShareAlike license, unless stated otherwise. Cite this article:
Mumbai Facts for Kids. Kiddle Encyclopedia.