Kabaddi is a contact team sport. Played between two teams of seven players, the object of the game is for a single player on offence, referred to as a "raider", to run into the opposing team's half of a court, tag out as many of their defenders as possible, and return to their own half of the court, all without being tackled by the defenders, and in a single breath. Points are scored for each player tagged by the raider, while the opposing team earns a point for stopping the raider. Players are taken out of the game if they are tagged or tackled, but can be "revived" for each point scored by their team from a tag or tackle.

In the international team version of kabaddi there are two teams of seven members. Each are on opposite halves of a field of 10 m × 13 m in case of men and 8 m × 12 m in case of women. Each has three extra players held in reserve. The game is played with 20-minute halves. There is a five-minute half-time break when the teams change sides. Matches are based on age and weight. Six officials supervise a match: one referee, two umpires, a scorer and two assistant scorers.

It is popular in the Indian subcontinent and other surrounding and South Asian countries, such as Iran and Pakistan. Although ancient accounts of kabaddi appear in the histories of both modern-day India and Iran, the game was popularized as a competitive sport in the 20th century by India; it is the state game of the Indian states of Andhra Pradesh, Bihar, Haryana, Karnataka, Kerala, Maharashtra, Punjab, Tamil Nadu, Telangana, and Uttar Pradesh. It is also the national sport of Bangladesh. 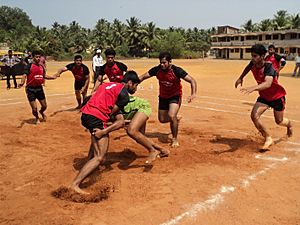 Two major disciplines of kabaddi exist; Punjabi kabaddi, also known as "circle style", refers to traditional styles of the sport that are played on a circular field outdoors. The "standard style", played on a rectangular court indoors, is a discipline played in major professional leagues, and competitions. After being demonstrated at the 1982 Asian Games in Delhi, kabaddi was added to the Asian Games' programme beginning in 1990.

The word "kabaddi" is derived from the Tamil word "kai-pidi” ("to hold hands"). 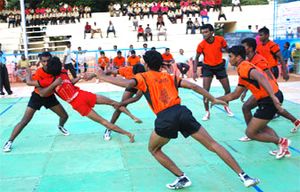 Kabaddi is one of the national sports of Nepal. Kabaddi is played and taught at a very early age in most primary schools beginning in the third grade or so in most Nepali schools. Kabaddi was also played by the British Army for fun, to keep fit and as an enticement to recruit soldiers from the British Asian community. Kabaddi was brought to the United Kingdom by Indian and Pakistani immigrants. The governing body for kabaddi in the United Kingdom is the England Kabaddi Federation UK.

All content from Kiddle encyclopedia articles (including the article images and facts) can be freely used under Attribution-ShareAlike license, unless stated otherwise. Cite this article:
Kabaddi Facts for Kids. Kiddle Encyclopedia.