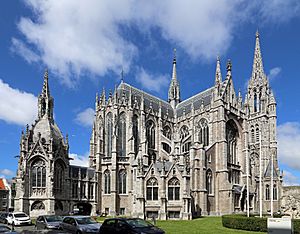 Sint-Petrus-en-Pauluskerk in Ostend (Belgium), built between 1899 and 1908 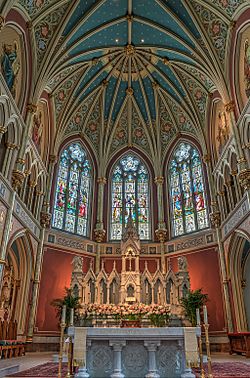 Gothic Revival architecture is architecture that has been made to look as if it is from medieval times, but is really much later. This architectural style began in the late 1740s in England. Its momentum grew in the early 19th century. Serious and learned admirers of neo-Gothic styles sought to revive medieval Gothic architecture.

The Gothic style of architecture was built in Europe between about 1140 and about 1550. Beginning in late 18th century Europe, through the 19th century and into the early 20th century in Europe and elsewhere there was a fashion to build in the Gothic style. In this period architects and their patrons had various different styles to choose from. There were also revivals of Classical and Renaissance styles. Since medieval Gothic buildings vary so much, some architects often copied selectively from medieval buildings and some adapted the style to the needs of their own period. The "Gothic Revival" style was most commonly used for churches, cathedrals, universities, town halls and sometimes houses.

Gothic Revival buildings have features that are like real Gothic buildings. They often have: 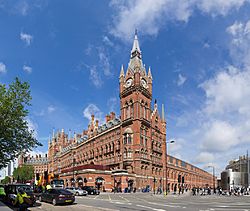 All content from Kiddle encyclopedia articles (including the article images and facts) can be freely used under Attribution-ShareAlike license, unless stated otherwise. Cite this article:
Gothic Revival architecture Facts for Kids. Kiddle Encyclopedia.