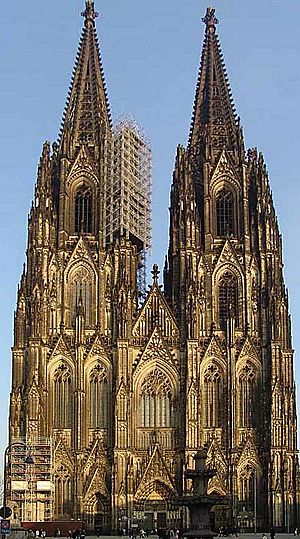 The cathedral, seen from the west.

The Cologne Cathedral was built in Gothic style from 1248. It was planned to make the cathedral like the one in Amiens. The choir was consecrated in 1322. The first bell could be hung in one of the towers shortly after 1410. Around 1510 building was stopped, because people had lost interest. The last payment for its construction was made in 1560.

For 300 years, Cologne had an unfinished cathedral. The cathedral was finished in 1880, still following original plans.

All content from Kiddle encyclopedia articles (including the article images and facts) can be freely used under Attribution-ShareAlike license, unless stated otherwise. Cite this article:
Cologne Cathedral Facts for Kids. Kiddle Encyclopedia.