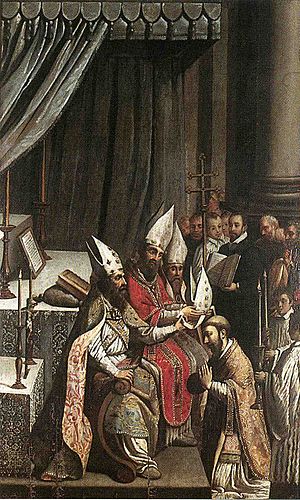 The Consecration of Deodat (1620, Claude Bassot).

Consecration is a special ceremony, usually religious, in which a person, or an object or a building is dedicated to a special purpose. When a new church is built there will be a special opening ceremony, called a "consecration". In many religions ordination is the process by which individuals are consecrated (ordained) as a minister.

The verb is to consecrate. The adjective is consecrated.

The word "consecration" is used in the Catholic Church as the setting apart for the service of God of both persons and objects.

The ordination of a new bishop is also called a consecration.

The life of those who enter religious orders (for example: monks and nuns) is also described as "Consecrated Life"

In Catholic and Orthodox churches, only men are chosen to be priests. But in many Protestant denominations, including the Church of England, women are allowed take leadership roles. (See Liberal Christianity) Some major Protestant denominations however, like the Southern Baptist Convention take a more conservative and traditional view of women.

All content from Kiddle encyclopedia articles (including the article images and facts) can be freely used under Attribution-ShareAlike license, unless stated otherwise. Cite this article:
Consecration Facts for Kids. Kiddle Encyclopedia.